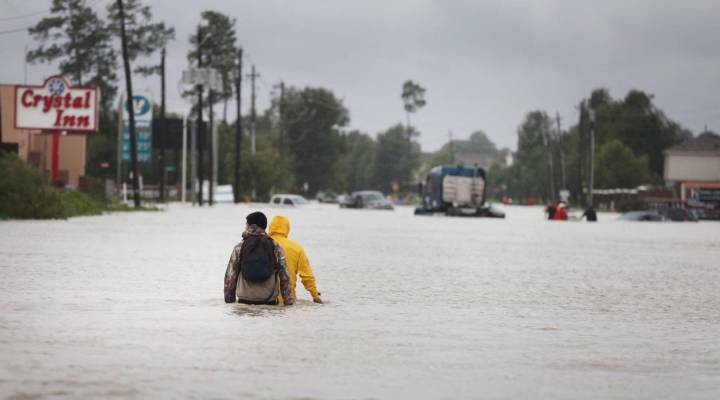 COPY
People make their way out of a flooded neighborhood after it was inundated with rain water following Hurricane Harvey on August 29, 2017 in Houston, Texas.  Scott Olson/Getty Images
Weather Economy

People make their way out of a flooded neighborhood after it was inundated with rain water following Hurricane Harvey on August 29, 2017 in Houston, Texas.  Scott Olson/Getty Images
Listen Now

The rain and flooding in Texas continue, but Harvey is not the first disaster the country has seen of this size. Katrina comes to mind, and Hurricane Sandy, too. Craig Fugate was the administrator for the Federal Emergency Management Agency under President Obama. And he was the boss when it came to how his multi-billion dollar agency responded to and cleaned up after Sandy. Marketplace host Kai Ryssdal spoke with Fugate to learn more about what it’s like to help people recover from a flooding event the size of Harvey. The following is an edited transcript of their conversation.

Kai Ryssdal: With the understanding that, first of all this is still a developing event, and Katrina and Houston are different than Harvey and New Orleans, it seems that things infrastructure-wise and logistics-wise are running better this time, what’s your sense?

Craig Fugate: Well I’ve learned never to compare to disasters, they’re all different. I can tell you that with Harvey we are dealing with a large number of homes that have flooded, many of whom were not in the flood zones where they had to buy flood insurance, so we have a very, very large uninsured flood loss developing in Houston right now.

Ryssdal: What’s going to happen when the rain stops and the water starts going away? Because that is sort of the very long tail for what FEMA does.

Fugate: Right, well still very much dealing with the active flood but the next steps will be where are people going to stay, both in shelters and in temporary assistance, hotels and motels and just about anywhere we can put people. But more important, where are they going to stay longer term and how do we start repairing a lot of homes, many of which did not have flood insurance.

Ryssdal: How do you do that, I mean do you go in with inspectors and adjudicators and figure out what’s habitable what’s not and then work with the parties down there?

Fugate: Well that’s going to be one of the big roles of local and state government with FEMA supporting. But the other thing is, and these are kind of the steps we’ve learned in all these floods is, it’s going to take a lot of volunteers over the next couple of weeks to get all these homes dried out. The first thing we’ve learned about floods is if we’re going to save a home, we need to muck them out to prevent mold and further damage so we can start focusing on repairs to get people back home.

Ryssdal: As you think longer term and how Washington, specifically Congress, deals with this, and I’m imagine you’ve spent more than your fair share of time at the green table in front of various congressional committees, where where does the ball land next in terms of funding the money for this?

Fugate: Well, FEMA is fortunately fully funded to respond to these kind of events. But they’re going to definitely need both additional borrowing authority for the National Flood Insurance Program for that program that’s already $25 billion in debt. But they’re going to probably need to borrow more money to service the policies here, in addition to a budget, raising the debt ceiling, the National Flood Insurance Program is up for reauthorization. We’ll be looking at how much money both immediately and longer term will be needed for this recovery.

Ryssdal: Yeah it’s going to be a busy September you think in Washington, huh?

Fugate: Well as we’ve watched before, there’s always a lot of debate and a lot of hand wringing, and a lot of finger pointing, but at the end of the day, Congress has always funded these disasters. So I sometimes tell people don’t look at the sausage making it can be pretty scary, but Americans have always come to each other’s aid. But I think it’s also important to note that because this is such a large number of homes that were not insured by flood insurance, the FEMA programs are not going to make families whole. So there is going to be a lot of long term need both from government but also from donations to volunteer groups to help people recover.

Ryssdal: When you say long term how long you talk in here, sir?