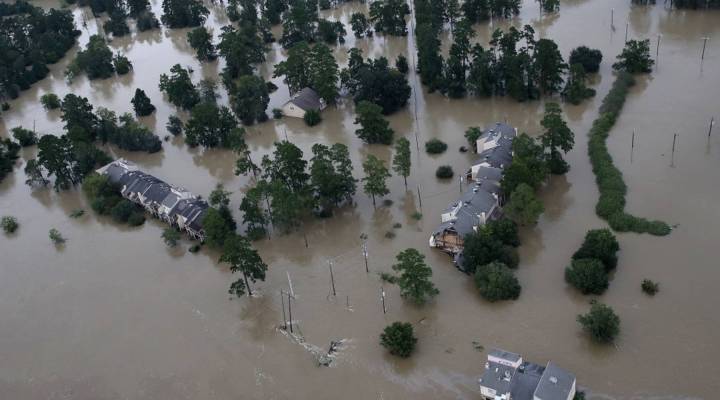 It’s been almost two months since Hurricane Harvey covered southeast Texas with 50 inches of rain, left hundreds of thousands of residents with flooded homes and disrupted lives. As of October 16, about 870,000 households had applied for direct financial assistance from the Federal Emergency Management Agency, and about 300,000 have been approved. Only U.S. citizens or legal residents are eligible for those direct deposits of relief funds from FEMA. The more than half a million undocumented people living in greater Houston have to find financial relief in other ways.

Ingrid is the name of a Honduran woman who came to Houston 12 years ago, and Marketplace is not using her last name because she has yet to obtain U.S. citizenship. Shortly after arriving, she met her husband and started a family. Like many people in the sprawling apartment complex where she’s staying in northwest Houston, she was displaced by Hurricane Harvey. Ingrid found the un-flooded, one-bedroom apartment through a friend. It’s where she and her four children — ages 12, 10, 6, and 3 months — will be living for the foreseeable future.

She said that on the night that Harvey made landfall in the Houston area, she woke up to the sound of water rushing into her old apartment, and knew they had to get out.

“We lost everything that night and tnext day,” Ingrid said in Spanish. “We walked to the car and slept there for a while because we didn’t have any other place to stay.”

The flood came at a particularly tough time for Ingrid. Her husband was deported back to his home country of Mexico just a week before the storm hit, after he was stopped for a traffic incident.

After a disaster like Hurricane Harvey, undocumented people like Ingrid are eligible for some government assistance — basically emergency food and shelter. But they can’t get things like FEMA cash assistance — up to $33,000 per household — or low-interest government loans to rebuild homes.

If a family is mixed-status, with parents or guardians who are undocumented, but with children who are U.S. citizens, then the household can apply for FEMA funds on behalf of the kids. That’s the case with Ingrid, whose children who were born here, so she gave it a shot.

“I filled out an application with FEMA but they still haven’t responded,” Ingrid said. “They haven’t sent me anything. They’ve told me nothing. I don’t have any idea what happened with that application. I’ve been to various organizations but none of them helped me.”

The FEMA application doesn’t require Ingrid to declare her immigration status, but she said she’s still worried about being targeted by immigration authorities if she applies for any aid from the government. Still, she said she’s willing to take the risk to help her children.

At a pop-up FEMA office down the street, more than 30 people crammed inside to speak with agents, fill out forms and get updates on their application statuses. There were a couple of interpreters inside to help the majority Spanish-speaking people waiting, but the atmosphere was chaotic and everyone seemed frustrated.

Right after Harvey hit, nonprofits set up shop in shelters to help undocumented people and Spanish speakers. But with shelters now closed, help is harder to find.

A group called United We Dream identified several families in dire need of help, and Ingrid’s was one. They connected her to a nonprofit that raised money online for Hurricane Harvey relief. Dona Murphey is chair of that group, an advocacy organization called Pantsuit Republic. Murphey said she felt great about writing a $5,000 check for Ingrid, but there were some snags. Ingrid doesn’t have a bank account, and no official U.S. identification. Murphey agreed to help her get the check cashed.

“So, she took that $5,000 check and went to some check cashing place and they told her, ‘we declined it, but we can’t tell you why.’ It bounced in the system and now she’s locked out of the system.”

Murphey said she and Ingrid tried ten check cashing stores and none would take it. So Murphey’s group took back the check, and, after a week of wrangling, gave Ingrid $5,000 in cash. Murphey said, for her, it underscores the constant challenges for the undocumented community.

“Everything that could go wrong, did,” Murphey said. “And I think that many of us take for granted that are so easy and take so little time and thought and energy for anybody else is just so impossible for her.

A week or so after our interview, Murphey called with an update about Ingrid. Ingrid let Murphey know that she sent some of the $5,000 cash to Honduras, to pay for a breathing machine for her sick mother. Ingrid also told Murphey she went to a FEMA office in Houston to check on the application for her kids.

Ingrid was ill at the time, and said a worker told her to come back when she wasn’t sick. Apparently Ingrid refused to leave, and someone called the police.  Ingrid has given up on getting money from FEMA, Murphey said.

“She said she’s not going back. And she said she doesn’t want anything to do with this, anymore.”

Murphey said Ingrid will have to rely on friends and charity donations, instead.