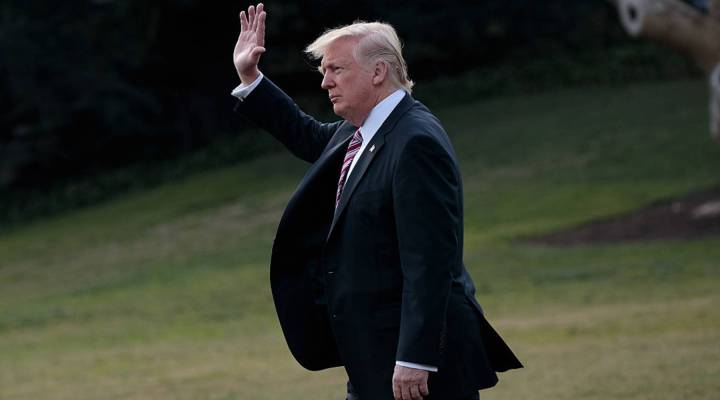 There’s always been a looming fear of machines replacing people in the workforce. But who would have thought that they would encroach on the Secret Service?

During President Trump’s 17-day working vacation at Trump National Golf Club in Bedminster, New Jersey, this month, his security team will be testing to see how drones could protect and serve. It’s the first known example of a drone being deployed for the president’s personal security staff. Any data recorded will be erased or overwritten within 30 days.

Marketplace Tech host Ben Johnson spoke with Missy Cummings, director of the Humans and Autonomy Laboratory at Duke University, who calls these drones “advanced balloons.” Below is an edited excerpt of their conversation.

Ben Johnson: How would drones work as part of a physical security or personal security apparatus?

Missy Cummings: The drone that they’re using is a tethered drone, and that’s different than what most people envision. This is a cable that runs from the ground to the drone and it allows the drone to basically hover at generally the same area for a long period of time without having to come down. It’s really just an advanced balloon.

Johnson: I love that description. But what does it do as an advanced balloon?

Cummings: It’s a balloon with a camera on it that can be navigated around a little bit easier than you could a regular balloon.

Johnson: What is the Secret Service potentially trying to do here?

Cummings: I would say the first use is to try to understand if there are any developing events — if somebody crashes a gate, for example. I’m sure that they would use it in some kind of forensic way if there were any other events to look at later. And they also could be trying to figure out how to use it to respond in real time. But this is not an advanced CIA-like system with any high degree of resolution. So, I think just broad situation awareness is the best use of it.

Johnson: Should we all be getting security drones?

Cummings: They already are being used at public events to get situation awareness. But you have to remember drones can be used both ways. Drones could be used by people trying to access crowd control and they could be used by people trying to cause crowd panic. And I do think there’s another question about whether or not personally you should have your own drone. Although I would like to follow my preteen around with one. She’s not too crazy about that idea. I’m definitely a hover parent.