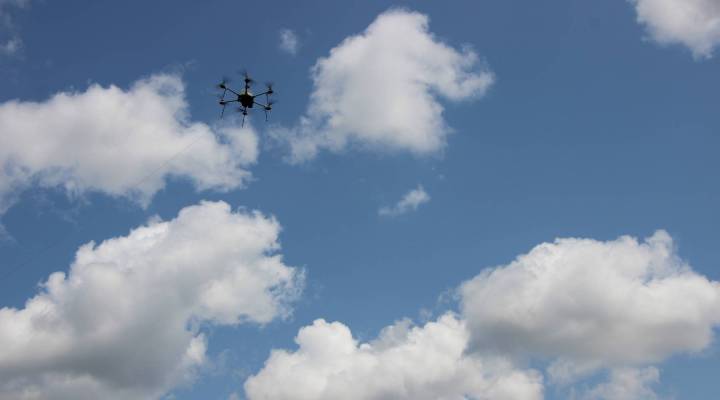 COPY
A tethered drone hovers over a pasture near Hankamer, Texas, looking for damage from Harvey.  Travis Bubenik/ for Marketplace

A tethered drone hovers over a pasture near Hankamer, Texas, looking for damage from Harvey.  Travis Bubenik/ for Marketplace
Listen Now

When hurricanes and tropical storms like Irma and Harvey hit, it can take a while to figure out how bad the damage is. In Texas, the Red Cross has been experimenting with a way to speed up the process, and the recovery, using drones.

In a pasture east of Houston, a Red Cross team huddles around a laptop, watching live images from a camera 400 feet above.

Patrick Graham, with drone maker CyPhy Works, has been traveling the Harvey-ravaged coast with the team, using the company’s “PARC” drone and its four to five mile camera range to track the damage.

Perry Stoll, also with CyPhy, has been watching the pictures come in back at the company’s Massachusetts headquarters.

“You know, a lot of devastation, a lot of ripped off roofs, ripped off siding, collapsed infrastructure,” he said, adding that it’s been hard to look at the images. “There’s going to be a lot of work to repair and get it back to a livable state.”

Fred Miclon is a volunteer with the Red Cross. He’s been using the drone to help people as they return to their neighborhoods now that floodwaters have receded. For instance, he said in the hard-hit town of Holiday Lakes, south of Houston, the view from the skies helped relief crews respond much faster to the needs of people who had gone back to the community than they could have by driving around.

“We were able to really assess damage quickly, and actually had a team that afternoon going down with food, water and supplies in order to help the families that were there,” he said.

“My vision is that we establish a rapid response unit that we can deploy as soon as a disaster occurs, that we can connect with emergency response agencies on the scene, that’s ready to go,” Martinez explained.

Still, there are some basic challenges: dealing with drone regulations and getting permission to fly. There are privacy concerns to consider, and when roads are flooded after a storm, it’s sometimes hard to get close enough to an affected area to launch the drone. Martinez said he would like to see the team move to Florida now, as communities there begin the recovery process.

Correction: The original version of this story misidentifed Fred Miclon. The story has been corrected.