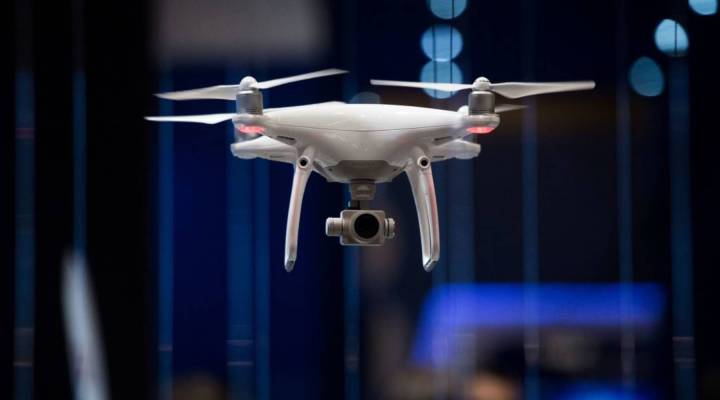 COPY
The number of drones piloted by hobbyists has increased considerably since 2013, but more consumer drones could put us at risk, Douglas Starr says. JOSEP LAGO/AFP/Getty Images

The number of drones piloted by hobbyists has increased considerably since 2013, but more consumer drones could put us at risk, Douglas Starr says. JOSEP LAGO/AFP/Getty Images
Listen Now

As consumer drones get cheaper and more popular, there are lots of drones in inexperienced hands and growing concern that they could be used for terrorist attacks. Legally speaking, you cannot just shoot drones out of the sky. So now, both government agencies and private companies are developing technology to keep drones away from places where they shouldn’t be. Douglas Starr is the co-director of the graduate program in science journalism at Boston University and a contributor to Wired magazine. Marketplace host Kai Ryssdal talked with him about his latest piece, “This Brilliant Plan Could Stop Drone Terrorism. Too Bad It’s Illegal,” and the budding anti-drone industry. Below is an edited transcript of their conversation.

Kai Ryssdal: Tell me about the company you focus on in this piece, Black Sage. It’s out of Idaho, right?

Douglas Starr: Yeah. Black Sage is just one of a growing handful of companies that’s devoting their resources to tracking and disabling errant drones.

Ryssdal: What is the threat that this growing industry is designed to counter?

Starr: Well, first of all, the number of drones that proliferate is huge. It’s over a million, and it’s growing by multiples each year. This happened ever since 2013 when the big Chinese dronemaker DGI produced the first consumer drones, and they just took off like crazy. So part of the problem is that there are so many, and they are kind of piloted by just hobbyists. So they end up in places where they shouldn’t be, like near airports, near stadiums, and it’s dangerous. There have been a lot of near misses with airliners. Last spring, one even bunked off a British airliner going into London. So they’ve got to get under control.

Ryssdal: And there’s a more serious threat, right? I mean ISIS is using is these. The Pentagon has put out, like, a $20 million contract.

Starr: Yeah, they’ve seen ISIS begin to use consumer-grade drones to spy and drop small explosives on people in the Middle East. And people here are being alert. The military and the FAA have been conducting a lot of tests all over the country to try to come up with systems to track and control drones. And there’s even an organization called the National Center for Spectator Sports Safety and Security that’s alerting stadium operators to the possible danger of drones.

Ryssdal: You went on a sort of a test run of the anti-drone stuff with Black Sage. What was it like?

Starr: It was fascinating. We were sitting in a trailer that served as a command center. Their assistant flew a drone out about a kilometer beyond where we could see it. They have a radar system that shows the drone as a blip. Then he uses artificial intelligence to say “What are the chances this could be a drone as opposed to a bird?” And then this high-def camera locks into it, and he can’t get away. And then when it comes in sight, one of the guys pushed a button, and that shot a burst of radio wave jamming at it, and it paralyzed the thing.

Ryssdal: But as you point out in the piece, if they did that, like, in the middle of LA or New York or something, everybody in the path of that beam loses their Wi-Fi.

Starr: This is what makes the problem so interesting. It’s illegal to use jamming equipment in the U.S. It has been since 1934 when the first FCC laws were passed. So the problem is, what do you do about this? Here’s a case where the regulations are lagging behind the technology that we need.

Ryssdal: What’s interesting about these Black Sage guys is that they were — even with you, person they came to trust, to some degree — they’re a little bit cat and mouse right? Because they don’t want to let the drone guys know what their anti-drone capabilities are.

Starr: There’s kind of a spy-versus-spy element to this. And it was fun, because every once in a while out of the blue I get a call saying, “OK, I’m somewhere in the Middle East. It’s really hot. We just had a successful demonstration for a bunch of guys in the Royal Guard of a country I can’t name.” I would just get these updates from there, and it was, it was fascinating. It’s just the way they put it, it’s a very interesting concept. They say that security has gone from a two-dimensional problem to a three-dimensional problem. So you could have a stadium and the metal detectors and everything you want, invest millions and a $500 drone could fly in over your head.

Ryssdal: Doug Starr is the co-director of the graduate program in science journalism at Boston University. His piece on drones is available in the new issue of Wired magazine. Doug, thanks a lot.