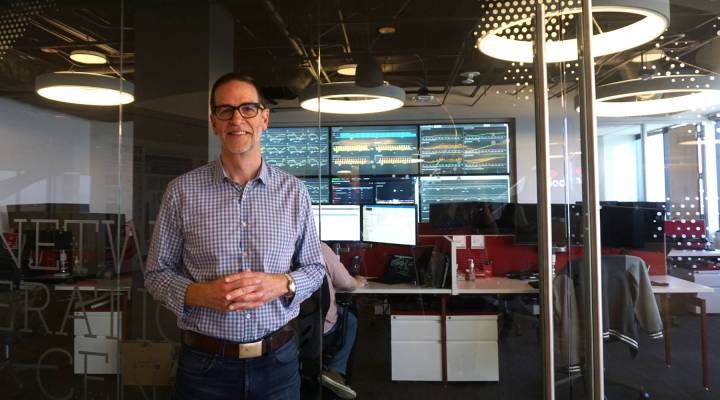 COPY
David Hagan, Boingo CEO, thinks the smartphone of the future is “going to be distributed within us.” Bridget Bodnar/Marketplace
Corner Office

David Hagan, Boingo CEO, thinks the smartphone of the future is “going to be distributed within us.” Bridget Bodnar/Marketplace
Listen Now

Current attitudes about Wi-Fi — that it should be free and abundantly available — could have created a problem for the CEO of a company that sells Wi-Fi — like say, David Hagan, head of Boingo. The company may still be best known for the Wi-Fi services it provides in airports, but there’s a good chance that if you’ve gone to a concert venue or sports stadium recently, Boingo is the company making sure you’re able to quickly post all those selfies to social media.

Kai Ryssdal spoke to Hagan at the Boingo headquarters in Los Angeles. Below is an edited transcript of their conversation. Listen to the extended interview on the Corner Office podcast.

David Hagan: This is the lobby of Boingo headquarters. And you walk in as you guys did this morning, and you see the network operation center. So it’s the heartbeat of the company, and it says what we do, right? We build, design, operate wireless networks in major venues.

Kai Ryssdal: Does it make you crazy that if I say “Boingo” to a lot of people, they’re going to go “Oh man, those guys in the airports.”

Hagan: No not at all. I actually get, “Oh, are you GoGo in the airplanes?”

Hagan: Yeah right? But I actually don’t, because people know us as a brand from the airport experience, and most people now get online in airports with Boingo for free.

Ryssdal: But it’s interesting because that’s not the core of your business now, is it?

Hagan: It’s about 20 percent of our business. Most people know us as that. That’s how we we built the brand. And we went from that strength and then went into a lot of different types of venues.

Ryssdal: When you say venues, what does that mean? Is that sports stadiums? Is it the Rose Bowl? What is it?

Hagan: So it’s major venues where you have a lot of people congregating, where cellular service typically is weak largely because you have so many people trying to access a network. So airports, transportation hubs, sports arenas. We’re in Soldier Field, we’re in Philips Arena in Atlanta, we’re in military bases where cellular coverage is typically very poor for our soldiers. So we still are in the same business of building and operating Wi-Fi networks. But the monetization strategy around those networks has changed dramatically.

Ryssdal: And the venue then pays you to do this and that’s how you’re making your money?

Hagan: So typically the venue will give us long-term rights. They may pay us to operate a network. The cellular carriers may pay us. And then we went into other types of venues, and we figured out other ways to monetize. We have advertising. We have partners pay us for access. So another way to monetize that free network is American Express pays Boingo; to their cardholder base, it’s free.

Ryssdal: It’s funny actually now, Wi-Fi is basically supposed to be free. I mean it just is.

Ryssdal: Does that make you crazy?

Hagan: No, because we figured out how to monetize it.

Hagan: I have. Yeah.

Hagan: So no smartphones. Most PCs did not have a Wi-Fi chip inside. You actually had to go buy the $100 card, that big honking Wi-Fi card, so it is a very different business. I think our original retail plan, which now sells for $9.95 a month in the airports for subscription, I think it was $79.99 —

Hagan: I know. We were very proud of the service, but it was a different time, right? So being able to hold up your laptop, not have it connected to any — no cords, no wires, but connected to the Internet was mind blowing. And again we launched before Wi-Fi chips were in laptops. We launched before it was even called Wi-Fi. It was still 802.11b.

Ryssdal: How much do you worry about the FCC and things like net neutrality and regulation of your industry?

Hagan: Yeah, we try to stay out of that. We’re neutral hosts so we —

Ryssdal: No, come on. Nobody’s in neutral about this.

Hagan: Well, we’re neutral hosts as a strategy, meaning we go to the venue and the venue’s our partner, and then we bring the carriers onto those networks. So we let the big guys fight out those kind of issues. We try to stay neutral and in between. A company the size of Boingo playing in the world of the big four telecom carriers and the cable [companies], we’re not going to drive policy.

Ryssdal: So that’s an interesting question. You serve something like a billion people right? That’s not small.

Hagan: We do. Well, it’s small in the context of the size companies that we both compete with and then partner with. You think about an AT&T, a Verizon, a Charter Cable. These are huge companies compared to us.

Ryssdal: Look out another 15 years for me. In other words, basically as long as you’ve been at this company, and let’s say you stick around for another 15 years. What does this space look like?

Hagan: So the device I think is going to change pretty dramatically. I think we all think, well, the smartphone, where could this possibly go? It’s unbelievable, right? It’s a supercomputer in our hand. I think that’s going to get distributed. So you already see a little bit with the Apple Watch, right? Now you see wearables. Our CTO has a chip embedded into his wrist.

Hagan: Yeah. So when he comes into the parking lot he hangs out is his hand and it opens the gate.

Ryssdal: We have to go track him down.

Hagan: Yeah, and it’s probably a little scary for folks, but it’s actually very natural, is all that capability in the smartphone is going to start getting distributed. So that may mean it’s distributed in other elements, other devices that we carry. I think it’s also going to be distributed within us.

Ryssdal: Within us within us?

Hagan: And it’s going to be amazing.

Ryssdal: The reason I recoil at that question is I’ve got a 10-year-old daughter, and she says, “Dad, when do I get a cell phone?” and I say, “Sweetie, by the time you’re ready for a cell phone, it’s just going to be in a chip in our brains.” So that’s basically what you’re saying.