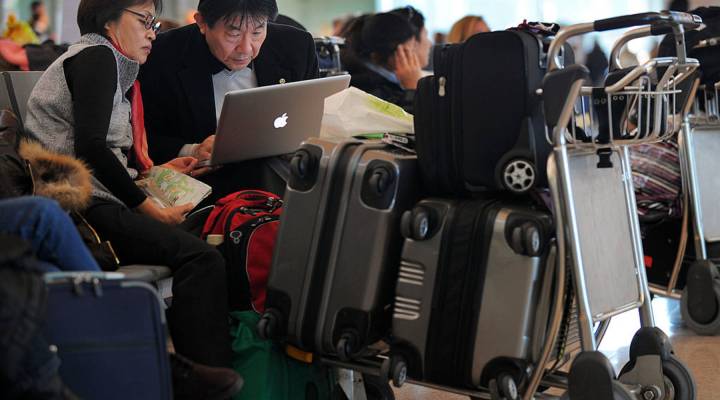 COPY
Sometimes, staying online while traveling can be tricky. But there are some easy, affordable options — if you plan ahead. LLUIS GENE/AFP/Getty Images

Sometimes, staying online while traveling can be tricky. But there are some easy, affordable options — if you plan ahead. LLUIS GENE/AFP/Getty Images
Listen Now

Imagine never needing to scour for Wi-Fi at hotels or airports, nor having to search for coffee shops offering Wi-Fi when you’re abroad. Or, the ultimate image of a busy traveler: having the ability to send emails from your laptop while aboard a plane awaiting takeoff (before the cabin door is closed, of course).

For the past three months, I’ve used a Mobile Citizen hotspot while traveling throughout the country for work and it has been a lifesaver. It got me thinking about all the ways travelers can stay connected in the air and on the ground. Here are several cost-effective options, and some tips, to keep you online no matter where you travel to:

For both GoGo and many international airlines, costs vary based on flight length and start at around $3 per hour and go up to more than $30 for a 24-hour pass. Some credit cards, such as the American Express Business Platinum and U.S. Bank Flexperks visa cards, provide 10 to 12 free GoGo passes per year, which can easily save you $100 to $250 if you use all 10. Frequently, buying a one-time-use pass with GoGo before you depart can save 50 percent or more.  Currently, a 1-hour pass costs $5 (expires in 30 days), while a 24-hour pass is $16 (expires in one year). With GoGo, you can also switch back and forth among your devices as many times as you’d like during a flight.

In-Flight Texting: Texting while in-flight can be a lifesaver for coordinating pickup details or doing time-sensitive work. In-flight phone calls are prohibited, but when connected to in-flight Wi-Fi, you can use Google Voice or Skype to send and receive text messages from 30,000 feet. In-flight texting options include:

● Skype charges 11 cents per text to any U.S. cell phone.

● Apple’s iMessages are free and unlimited between iPhones, iPads and Mac computers.

● T-Mobile (partnered with GoGo) provides free texting in the air for T-Mobile customers with newer phones.

Transform Your Smartphone Into a Mobile Wi-Fi Hotspot: The simplest and easiest way to get online while traveling is to turn your phone into a mobile Wi-Fi hotspot. This allows multiple devices to have internet access in places where Wi-Fi would not normally be available. It’s perfect when you, your family, friends or colleagues are on the go via car, bus, train, plane, or even at the beach or in the mountains.

The technical term for this method is “tethering.” Tethering is handy for tasks, such as writing longer emails, where a computer is superior to a smartphone. iPhones, Android phones, and many other smartphones already have the capability to tether. iPhone tethering instructions can be found here; Android instructions are here.

Be sure to check with your carrier before trying to tether. Some U.S. carriers block or restrict tethering, while most international carriers allow it. Be warned: Avoid streaming video or other data-intensive activities. You could use up to 1GB or 2GB of data in less than an hour when streaming video.

Mobile Hotspots: Although tethering is convenient while traveling, a mobile hotspot might be a better choice if you need Wi-Fi throughout the day, need more data, or don’t have a smartphone. AT&T, Sprint, T-Mobile and Verizon all offer plans available as either a monthly subscription add-on to your current cellular plan or as a prepaid option. Notably, both Sprint and T-Mobile offer 1-day and 7-day passes costing $5 and $10 respectively, which could work well for occasional travelers.

This Netgear Fuse mobile hotspot, seen here, is available to nonprofits and schools for $10 per month. It’s the typical size of a mobile hotspot.

Testing Your Internet Speed: Not all internet access is created equal. Internet speeds can vary widely and the best way to assess the quality of your current internet connection is to run a free speed test. Evaluate ping times; the lower the better. Less than 100ms is good, and less than 20ms is great.

For download and upload speeds, I generally find at least 2 Mbps for downloads and 1 Mbps for uploads is serviceable. Ideally, your connection will be at least 5 to 10+ Mbps down and 2+ Mbps up. When traveling, consider checking your internet connection speed before conducting important calls via Skype or Google Hangouts, in advance of presenting on webinars or attempting to meet a time-sensitive project deadline.

No one wants to return home from traveling abroad to find a giant cell phone bill with international roaming and data charges. To avoid that possibility, either add a temporary international voice and/or data package through your current cell phone carrier, or plan to purchase a SIM card with service from a local provider at your destination.

Among the four major U.S. carriers, Sprint and T-Mobile offer the most affordable international data and voice options. In contrast, AT&T and Verizon are respectively charging between $150 and $250 per 1GB of data.

Here are some options to help you plan ahead:

Beyond Your Cell Carrier

Local SIM cards: Prices vary widely, but expect to get the SIM card for between $1-$15, or for free in some cases. Voice and data service often comes in increments of 7, 14, 21 days, or one month, with data prices ranging from as little as $5 per 1GB to as much as $30+ per 1GB. Make sure to activate and test the service before leaving the store, since instructions are typically in a foreign language.

To use this method your phone must be unlocked. This means the phone is enabled to use SIM cards from other carriers. Before your international trip, call your cell phone service provider to ask if your phone is already unlocked, or if it can be unlocked.

I’ve purchased local SIM cards in recent years in Canada, Switzerland and Italy. In Italy, I found a package that offered 100 minutes of international calls, texting, and 4GB of data for only $35 including the SIM card.

Project Fi by Google: Offers unlimited talk and text domestically for $20/month, plus $10/month per 1GB, with unused data refunded back to your credit card. Initially, Project Fi was available by invitation only, but Google recently opened access to everyone. Note that Project Fi currently requires you to have, or buy, a Nexus 5 smartphone for $199 or a Nexus 6. Once you have the service, using an iPhone 6 or another recent smartphone seems to work best.

Data is the same $10 per 1GB for international travel, plus free texting while abroad and only $0.20/minute for calls. If you are connected to Wi-Fi, calls back to the U.S. are free and unlimited. You can also order multiple “data only” SIM cards as additions for free, which means you could get your whole family online likely using their existing devices. Project Fi runs on both the Sprint and T-Mobile networks domestically and has service agreements to provide coverage in over 120 countries.

With Project Fi, you can pause service (and thus not be billed the $20/month service fee) for up to 90 days at a time. This feature is attractive for use as a travel phone a few times per year, while keeping your existing cell phone service provider.

On a recent trip to Toronto, Project Fi enabled me to present on a webinar while in the car. I had one phone displaying the webinar slides and the other phone calling in via Skype. The total cost to participate in the one-hour webinar: less than $2. The fact that no one knew I was in a car or calling via a mobile data connection using Skype: priceless.

Skype: Provides unlimited calling to any landline or cell phone in the U.S. and Canada for $2.99 per month. You can download the Skype app for your iPhone, iPad or Android device and/or use the Skype application on your computer. Generally, Skype works well using mobile data but it’s ideal to connect it to Wi-Fi.

Be alert to the color of conversation bubbles. Those with a blue background indicate an iMessage conversation (using your data connection and not counting as texts as far as your cell carrier is concerned). Conversation bubbles with a green background indicate a regular text message, which means your cell phone provider is charging for each text message sent and received. No special downloads are required for FaceTime and iMessage, since they come pre-installed on all Apple devices.

Google Voice / Google Hangouts: This free service allows calls to any telephone in the US and Canada through the Google Hangouts app, when using either mobile data or a Wi-Fi connection. Hangouts is an app available for download on iPhone, iPad and Android devices or using your computer’s web browser. Unlimited texting to U.S. and Canada is also free.

The bottom line? Plan ahead and you can avoid paying a high price for connectivity.