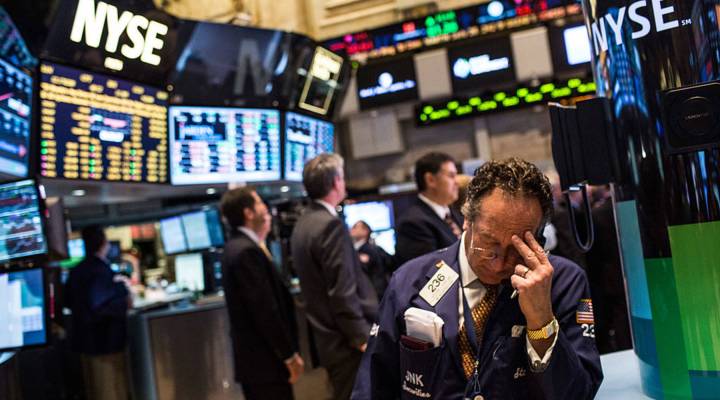 COPY
A trader works on the floor of the New York Stock Exchange. Andrew Burton/Getty Images

Today was a rare day in the red for the major indices. They were down just a little. One day, however, does not a trend make. That brings no comfort to short sellers, traders betting the markets are due for a fall. They’re becoming scarce as stocks keep on going up. Ben Eisen wrote about the lack of short interest in the Wall Street Journal today and spoke with Kai Ryssdal. Below is an edited transcript of their conversation.

Kai Ryssdal: Tell me first of all, just so everybody knows, what we’re talking about: What is shorting a stock or an index?

Ben Eisen: So short selling is basically taking the other side of a bet on the market. Most people put money into the market thinking that stocks will go up. But if you think they’re going to go down, you can bet against the market. It’s a practice that has sort of a storied role on Wall Street. A lot of short sellers have kind of taken down companies in the past basically by betting against the shares and, you know, hoping they’d fall.

Ryssdal: And you say in this piece that we’re at a four-year low in overall shorting in the market?

Eisen: Yeah, this is just one measure of short interest, but it is actually a short interest on a specific ETF that tracks the broader market —

Ryssdal: Can you explain the disconnect for me between what we see in the stock market, which is progress to the upside, versus what we see in the general economy, which is growth but sluggish, jobs are being added but not as much as we really need? How do you make those two make sense?

Eisen: I mean, you really saw a surge in the stock market right after the election. There was a lot of movement higher in stocks based on, sort of, hope that policies would be put into place with the new administration that would get inflation going faster that would get economic growth going faster. Things like tax reform, infrastructure spending. These were things that for months traders were talking about as being sort of the reason stocks were rallying. Yet, we really haven’t gotten that, but it hasn’t exactly been ruled out yet, so hope is still there. And, you know, that’s really what’s supporting this for now it seems. And one other thing I did mention sort of as a tangent though is you do have corporate earnings, which is another sort of fundamental thing on which stocks rally, and they’ve been doing pretty well. So even though the economy isn’t doing great, you’re still seeing corporate profits grow.

Ryssdal: With the caveat here that everybody ought to contact their own financial adviser before they make any investment decisions: What do you see in terms of people looking on the upside? I mean, do we see people piling money into the market even as the shorts are saying, “I don’t know what’s going on here?”

Eisen: You’re seeing a lot of money flow into the market. You know, weekly fund flow data — basically the amount of money that people are putting into mutual funds and exchange traded funds each week — really shows people just keep putting money into the market. And you know, I think that’s one sign that people who may be held out from this rally thinking that stocks would go down are starting to believe that, OK, maybe stocks are going up.

Ryssdal: And they go down, too. We have to say that, that’s the disclaimer right?

Eisen: Right, of course. And there is a sense in the market, too, that when everyone thinks that stocks can only go up, that’s the time when they go down. A sense of complacency taking hold. So that’s that’s just the way it works.