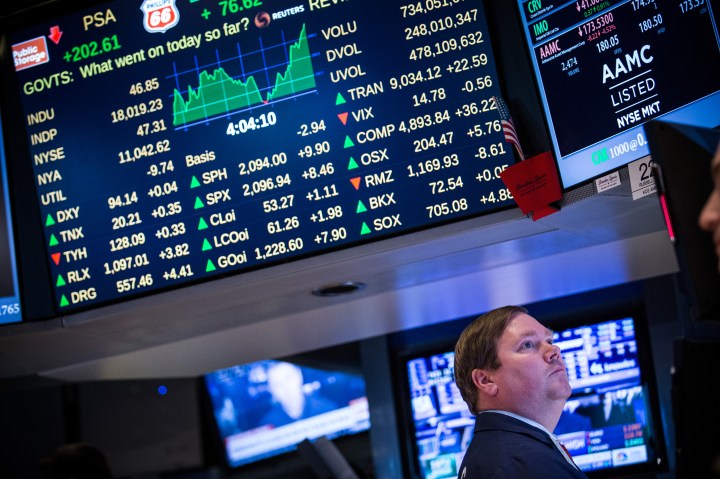 Competition is heating up for popular stock tickers — the three-or-four-letter names assigned to a security for trading purposes — as growing numbers of retail day traders look for stocks with memorable tickers.

Katie Greifeld is a reporter at Bloomberg News who covers financial markets and exchange-traded funds. She wrote recently about the emerging gray market in reserving and purchasing popular stock tickers.

The following is an edited transcript of her conversation with “Marketplace” host Kai Ryssdal about her down-the-rabbit-hole effort to purchase one of the most sought-after ticker symbols right now — MEME, a reference to the volatile “meme stocks” whose price movements are often driven by retail investor enthusiasm and hype.

Kai Ryssdal: What is it about these ticker symbols? Because this, this piece you wrote, is fascinating. It’s six-figure prices, and people want them, and it’s just there’s a lot going on.

Katie Greifeld: Yeah. So, there’s been kind of this ticker gray market to emerge, specifically for ETFs, because tickers really matter. I mean, it’s the three-to-four-letter symbol that identify stocks and funds. And in the story, we included a 2019 study by Pomona College which found that tickers that are actual English words, they tend to be easier to trade and they have greater liquidity, lower spreads, and they’re more popular with individual investors, with retail traders.

Ryssdal: Right. ETFs, we should say, are essentially mutual funds that trade like stocks, just so nobody gets confused. But the case in point in this piece you did, and that your entry into this gray market was literally MEME, and the chase for that ticker. Give me the elevator version of that story, elevator pitch.

Greifeld: OK, so by now, I think we’re all familiar with meme stocks. So I actually found out there was an issuer that was sitting on the MEME ticker symbol.

Greifeld: Yeah, I wouldn’t say squatting. I think they were trying to design the best strategy to live up to the name because, I mean, the MEME ticker, it’s like the Holy Grail.

Greifeld: Yeah, a lot of pressure, a lot of pressure. So I found out who was holding it. It was Roundhill Investments. And in talking with them, I found out that actually, unrelated to MEME, someone had actually tried to buy one of their live tickers off of them for 250 grand, unsolicited. So I had to try to buy MEME. Why not? And I wasn’t successful, obviously. They actually did finally file with the [Securities and Exchange Commission] for a fund late in August with the ticker MEME.

Greifeld: Yeah, you know, my first reaction to that was like, “Wow, that’s a lot of money just for four letters,” but then you think about it. I was asking Will Hershey of Roundhill, why wouldn’t he sell it to me? I got up to half a million dollars, and he still said no.

Ryssdal: Half — I’m sorry — half a million fantasy dollars. Because you know, I mean, unless Bloomberg’s buying, right, you don’t have a half million.

Greifeld: Yeah. Funny money, you could call it. I didn’t get as far as to think what would happen if I actually tried to submit that expense report. But Hershey’s logic was that, you know, this fund could take off. The fees and the flows that this fund could attract, in his view, is worth well more than half a million dollars.

Ryssdal: How much of this, the rise in the importance of — and look, a good ticker symbol has always been important — but how much of the rise of this gray market is because of the rise of retail investing, which has, of course, led to meme stocks and all of that, but there are more laypeople, for lack of a better term, getting into the market now, right?

Greifeld: It’s hand in glove, the rise of retail and their interest specifically in thematic ETFs, which are ETFs that invest along a theme, like robotics or electric vehicles or disruptive companies. And there’s fewer cool tickers to go around because we’ve seen so many [special purpose acquisition companies] and companies come public in the past year that it has created this arms race to get the best, most memorable ticker popular for your fund.

Ryssdal: It has to be pointed out that a good or memorable ticker symbol is a relatively small part of the equation, right? Because if you’ve got MEME, but you’re managing that fund terribly, you ain’t gonna make a lot of money, and people aren’t going to give you their money to manage.

Greifeld: Exactly. Yeah, we have seen a few not-so-successful attempts at it. We had the VanEck Vectors Social Sentiment ETF with the ticker BUZZ, which is a very good ticker —hasn’t really done that well. And part of the reason why is because it rebalances monthly, and when we’re talking about meme stocks, that’s like a year in meme-land, so it’s not just the ticker. You actually have to have the performance and the strategy to back it up.