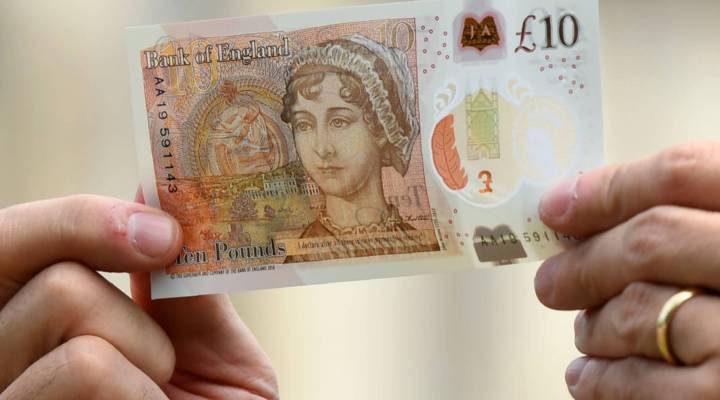 COPY
“Jane Austen was always concerned about the money she made from her writing,” said Kathryn Sutherland, an Oxford professor. “She would be proud and amused to find herself on a bank note.” CHRIS J RATCLIFFE/AFP/Getty Images

“Jane Austen was always concerned about the money she made from her writing,” said Kathryn Sutherland, an Oxford professor. “She would be proud and amused to find herself on a bank note.” CHRIS J RATCLIFFE/AFP/Getty Images
Listen Now

The Bank of England unveiled a new 10 pound note in Winchester on Tuesday. The date and the location of the unveiling were carefully chosen because adorning the new currency is an image of Jane Austen, who died 200 years ago on this day and is buried in the southern English city.

Every few years, the Brits depict a different public figure on their bills. Austen, one of the world’s best-known and highly esteemed writers of romantic fiction, replaces the Victorian naturalist and creator of the theory of evolution, Charles Darwin. Austen’s depiction on the new 10 pound note is fitting for a writer who not only wrote about love and marriage but also took a keen interest in the bottom line. That interest is unsurprising, since she was the unmarried daughter of an impoverished clergyman and spent much of her life in straitened circumstances.

“I think she would have been amused by this tribute,” said Kathryn Sutherland, a professor of English Literature at Oxford University and curator of a new Austen exhibition in the Bodleian Library. “Jane Austen was always concerned about the money she made from her writing. She would be proud and amused to find herself on a bank note. She was quite materialistic.”

One item in the Bodleian exhibition bears that out: a replica of the writer’s silk overcoat, or pelisse, which probably cost around 20 percent of her annual earnings.

“It’s a sizeable amount of her money,” Sutherland told Marketplace. “She was splashing out on a garment, the equivalent of haute couture, and I think it’s her saying: ‘I’ve arrived. I’m somebody!’ ”

Anyone who has read an Austen novel or seen a movie adaption will recognize that preoccupation with cash and purchasing power. All the main male suitors in her most popular book, “Pride and Prejudice,” come with a price tag attached to them: Mr. D’Arcy, 10,000 pounds annually; Mr. Bingley, 5,000 pounds; Mr. Bennet, 2,000 pounds; and Mr. Wickham, the villain, getting his just deserts on a meager 100 pounds per year.

“Income and social status feature in all six of her novels,” said Mary Guyatt, who manages the museum in Jane Austen’s former home in the Hampshire village of Chawton.

“Jane was making a comment on the fact that in her day, women relied on making a good marriage for their economic security,” Guyatt said.

Jane herself accepted an offer of marriage — and the prospect of economic security — from a wealthy neighbor, Harris Bigg-Wither. But, on reflection, she backed out, deciding not to become Mrs. Bigg-Wither after all. Sutherland said that was a turning point in Austen’s career.

“She then begins writing in earnest and sends off her first novel to a publisher. So I think she does see that as a moment when she has, as it were, made her choice, and her choice is to try to make money from her novels,” Sutherland said.

But Austen didn’t really succeed in that aim. She made, in total, no more than $25,000 in today’s money from her books and remained financially dependent on her brothers. She did, however, write her way into the hearts — and now that her image will appear on the new bill, into the wallets — of millions.