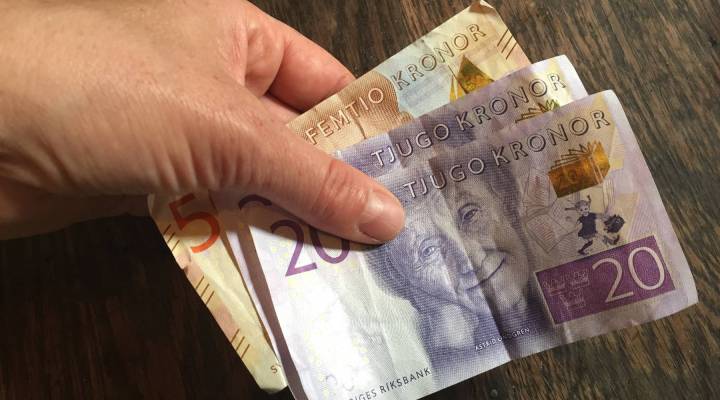 COPY
Cash in Sweden is on the way out.  John Laurenson

Cash in Sweden is on the way out.  John Laurenson
Listen Now

Back in 1661, Sweden was the first European country to introduce paper money as bank notes. Now that Scandinavian country has almost done away with it and is on course to be the first nation to go completely cash-free.

In Sweden, you can no longer use cash on trams or buses and many shops and cafés don’t accept cash. Cash is even becoming rare in banks. Out of Sweden’s 1,600 banks, 900 don’t do cash— you can’t deposit it or withdraw it. The number of bank robberies has declined steeply in consequence.

At Stockholm’s Abba: The Museum, you can’t use cash either. Its CEO, Joanna Madsen, is one of the many Swedes who now never carry any cash.

“I am totally cashless,” she said. “I haven’t had any cash in Sweden for at least two or three years.”

For small payments, Swedes like Madsen often use a Swedish app that transfers money using people’s phone numbers. Even panhandlers sometimes use it, writing their cell phone numbers on bits of cardboard.

Another Swedish invention is a card terminal that fits onto your smartphone that is popular with street vendors, allowing their customers to forgo cash.

But Bjorn Eriksson, head of the campaign group Cash Uprising, is worried about where all this is leading.

“I think you’re leaving a lot of people behind,” said Eriksson. Some 10 percent of the Swedish population – including many elderly people – are still highly dependent on cash.

Worse, said Eriksson, “the private big banks are doing their best to kill the possibility to use cash and the reason is very simple – they don’t earn money on cash.”

Cecilia Skingsley, deputy governor of Riksbank, Sweden’s central bank, said she’s neutral on giving up cash, but saw a drop in illegal activity — from drug trafficking to illegal employment — as a benefit of a cashless society.

“The disadvantage is, for instance, that many people like making transactions without it being traced,” she said. “The upside of going cashless is that it’s more difficult to do informal transactions or evade taxes.”

Riksbank predicts that cash will totally disappear in Sweden by 2030. Plenty of time to get used to the idea that your banker will know how many beers you had last night.