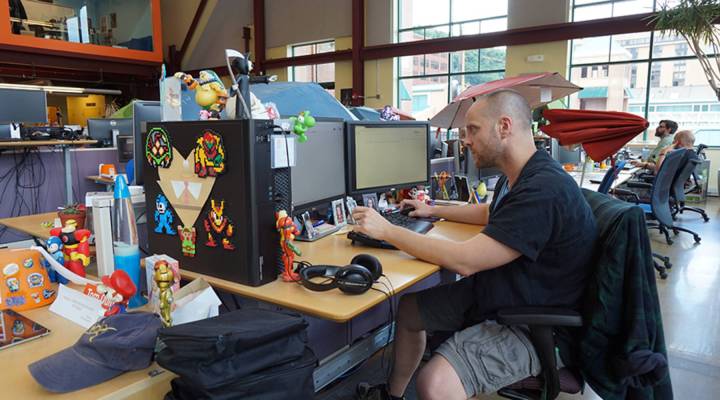 COPY
Tom Quitoni is a quality assurance manager at Schell Games. There, managers review workers, workers review managers and everyone provides feedback on others in the company. “It gives you a unique perspective,” Quitoni said. Erika Beras/Marketplace

Tom Quitoni is a quality assurance manager at Schell Games. There, managers review workers, workers review managers and everyone provides feedback on others in the company. “It gives you a unique perspective,” Quitoni said. Erika Beras/Marketplace
Listen Now

As a lawyer at a big firm and other companies, Chris Arnold remembers those nights before his annual performance reviews well, if reluctantly.

“Night sweats. Shakes. Terror,” he said. “It was a lot of anxiety.”

That’s because Arnold didn’t know what to expect. Would he get a raise, make partner or be greeted with a nasty surprise? Turns out that type of backward-looking assessment of someone’s performance didn’t work so well for companies either.

Beth Jones, an expert in work management, said neuroscience has shown us that motivating people and driving change requires a steady stream of feedback.

“It is what our brain is looking for all the time,” she said. “Five times a second, our brain is scanning the environment.”

We’re scanning it for validation and clues to how we’re doing. With that in mind, Jones said 75 percent of big companies — including Deloitte, Cigna and Cargill — have changed the way they evaluate performance to emphasize growth and goals, rather than past performance.

Some companies have gone to more frequent reviews. Others have dumped them altogether. It’s a far cry from the days when many companies embraced a system known as “rank and yank.”

That expression comes from the Army and refers to listing best to worst and then sidelining or demoting the worst. GE pioneered corporate use of the method decades ago. Lots of companies followed suit, and then, like GE, they yanked it.

These days at GE, workers operate in a constant feedback loop.

“Now, it can happen at any time, during any day where you’re doing something and someone will come up and say, “attaboy,” or “Have you ever considered this?’ ” said David Pinson, operations and facilities leader at a GE Advanced Manufacturing facility near Pittsburgh.

And GE doesn’t use the term “performance review” anymore. It’s all about performance development. Janice Semper, GE’s culture transformation leader, helped establish the new system. She said it was part of moving into the digital era and leaving behind “a commanding control-type style which was very synonymous with the industrial era.”

Semper said changing GE’s culture to put more focus on coaching and collaboration has taken years. But the shift was critical if the company wanted to hold onto its workers and stay competitive in a fast-moving market.

“The more volatile and uncertain and dynamic the environment is, the more important it is that people get a sense for how they’re doing,” she said.

Arnold — the guy with the sweats and the shakes — now works at Schell Games, a game design company. It does ongoing reviews. And on days when Arnold has one, he said he’s pretty relaxed.

Part of this newfound relaxation is the result of splitting performance reviews and salary talks into separate conversations.

“That dollar sign sucks up all the oxygen in the room,” he said.

Arnold has also learned what it’s like to be on the other side of the equation. At Schell, workers review their bosses and their peers.

“There are no sacred cows in our studio,” he said. “We’re just looking for a system that is sustainable over time.” And one that doesn’t give people nightmares.