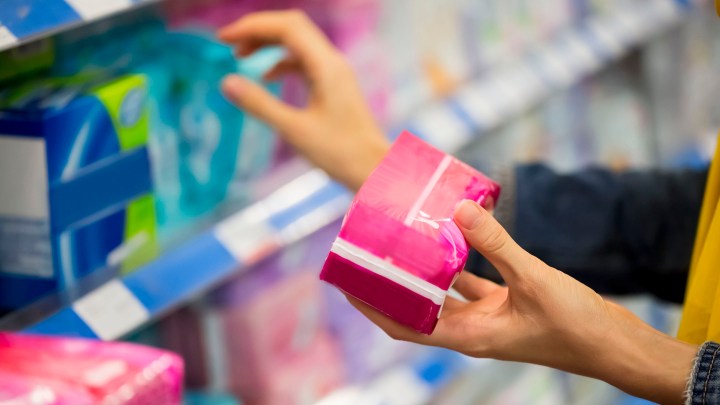 COPY
People can use the money that they put aside for menstrual products if they buy them at the FSA store or with reimbursable expenses. ShotShare/iStock via Getty Images

People can use the money that they put aside for menstrual products if they buy them at the FSA store or with reimbursable expenses. ShotShare/iStock via Getty Images
Listen Now

As the year winds down, people who have certain health insurance plans may be looking to spend money they’ve stashed in pretax Flexible Spending Accounts.

The CARES Act pandemic relief bill that became law earlier this year expanded the list of items that FSA money can be used to buy.

Many over the counter medicines are OK once again, and, for the first time, so are feminine hygiene products.

Up until this year, you couldn’t spend FSA money on tampons, pads or other products for periods.

“So this is based basically in an IRS tax classification, or what I would have called misclassification, of menstrual products where they were not designated as qualified medical expenses, as compared to say sunscreen and contact lens solution,” said Jennifer Weiss-Wolf, a vice president at the Brennan Center for Justice and co-founder of the group Period Equity. “So the CARES Act basically took care of that classification and acknowledged that it is an improper one.

“Now, people can use the pretax dollars that they put aside for menstrual products if they buy them at the FSA store or with reimbursable expenses,”

That’s led to a lot of new business for companies that sell reusable period products like silicone menstrual cups or washable pads, which can be more expensive upfront than disposables.

Lyndsey Arnold is a vice president at Thinx, a company that makes period underwear, and said the rule change was an unexpected boon for its business.

“When the lockdown started, we weren’t really sure how to plan the business, and this was kind of a little good luck charm that was given to us,” Arnold said. “So it’s actually really, really helped. It’s driven about a 40% increase in our overall sales for the partnerships side of the business,” especially partnerships with online stores that specialize in eligible products, like the FSA Store.

She said that’s translated into millions of dollars in unexpected revenue this year. Also helping is the fact that many people are working from home and doing more shopping online.

“And I think people are more willing, you know, to try something when they’re in the comfort of their own home that they haven’t tried before,” Arnold said.

But in order to take advantage of the new tax benefit, one has to have an FSA (or Health Savings Account, in some cases), which are usually only an option for those who have jobs with health insurance. In this economy, many people have neither.

Lynette Medley runs No More Secrets, a nonprofit in Philadelphia that delivers free period supplies directly to low-income families. She said she is glad to see more attention for the issue, but points out this expansion of FSA eligibility primarily helps people with higher incomes.

“So, of course, I still think it’s great for those populations who basically can afford [the products] and have a job and can pay into Flexible Spending, which is a whole privileged community,” Medley said. “But then I’m thinking, ‘is this addressing menstrual equity, menstrual inequality and period poverty with most of our vulnerable populations?'” she said.

According to 2018 research from the Alliance for Period Supplies, 1 in 4 women struggle to purchase those supplies due to lack of income. And that was before the pandemic.

Weiss-Wolf said even if these recent changes don’t expand access for everyone, they do set an important precedent.

According to Period Equity, 30 states still have such taxes, often referred to as a “tampon tax.”