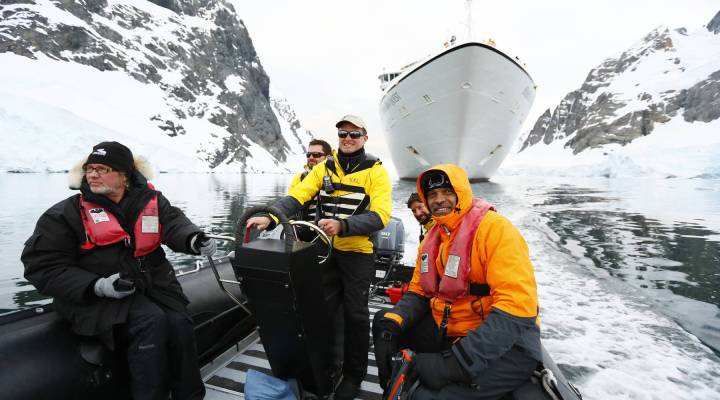 The calendar says today is the first day of summer, so we’re going to take a look at the business of vacations. Specifically, a vacation tens of millions of Americans take every year: cruises.

Carnival Corp. is one of the biggest travel and leisure companies in the world, encompassing not just Carnival lines but also Princess and Holland America, among others.

Kai Ryssdal spoke with Carnival CEO Arnold Donald about political tensions in the business of vacations and more. Below is an edited transcript of their conversation. Listen to the extended interview on the Corner Office podcast.

Kai Ryssdal: Why did you want to run a cruise company?

Arnold Donald: Well, you know, I was on the board of Carnival Corp. for a number of years. I almost said no. Not because I didn’t like cruising or anything, but I had had a very successful business career, and I thought I was pretty much done as an operator, and I realized I was an idiot. I should have been begging for the job, because it’s absolutely the best job in the world.

Ryssdal: What do you do when you’re at a cocktail party or a dinner party or something and somebody says, “Arnold, what do you do?” And you say “Well, I run Carnival Cruise Lines,” and they say, “Oh yeah, that’s the one that had the ship that had all the unsanitary problems. And then there was the Costa Concordia… the high-profile nature of the problems you have, I guess is the question.

Donald: You know what, Kai? When I first came on, that may have been the case. But today people say, “Wow, I hear Carnival is doing great. And I see you guys have had tremendous success.” And were someone were to ask me about those incidents that happened, I would just say that first of all, the one was obviously very upsetting. It was a real tragedy. And the others were kind of media events. No one got hurt or anything like that. And so the reality is cruising is one of the safest things you could ever do. And as many cruisegoers will tell you, it is the best vacation experience there is.

Ryssdal: Those cruisegoers, who are they? Because I think probably in the popular imagination, they are aging Americans, grandmothers, grandfathers. Probably not the younger couples and the married families.

Donald: You know, we have I can’t tell you how many weddings on board our ships, so it depends what you’re looking for, and that’s the beautiful thing about cruise. It’s all about travel and travel is all about bringing people together. And what happens in all that exchange of human spirit is people discover what they have in common, and that allows them, then, to celebrate differences.

Ryssdal: So not to take away from any of that, which I actually believe in, but you’re a guy running a company in a country where the president is doing all that he can to restrict travel to this country by some groups, to withdraw us from large parts of the international community. How worried are you about the political environment and your bottom line?

Donald: Well, for us, obviously, as long as people can travel and want to travel, we’re going to be in great shape. If anything that severely restricts travel or causes fear in people where they choose not to travel, that obviously is not good for our industry. Every year for as far back as you can go, there have always been issues. We used to be able to go to the Black Sea, you know. Today we can’t because of political tensions. You know, our assets are mobile, and we will go where we can and take people where they want to go.

Ryssdal: When you go on a Carnival ship, does the crew and the captain know who you are or are you incognito as it were?

Donald: Well, at one point I had some feelers from “Undercover Boss,” and I didn’t think there was a makeup crew good enough, you know. So to be honest with you, they know who I am. Not all of the crew knows, much of the crew, certainly the captains and whatnot.