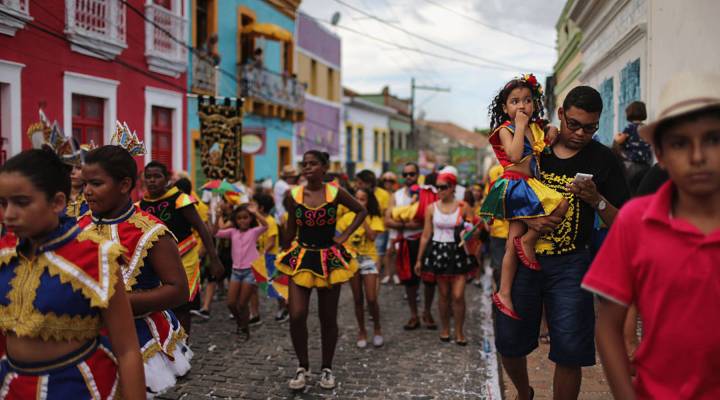 COPY
Revellers march during pre-Carnival celebrations on January 30, 2016 in Recife, Pernambuco state, Brazil. Health officials believe as many as 100,000 people have been exposed to the Zika virus in Recife, although most never develop symptoms. Carnival celebrations are scaled down, but continuing normally as planned. Mario Tama/Getty Images

Revellers march during pre-Carnival celebrations on January 30, 2016 in Recife, Pernambuco state, Brazil. Health officials believe as many as 100,000 people have been exposed to the Zika virus in Recife, although most never develop symptoms. Carnival celebrations are scaled down, but continuing normally as planned. Mario Tama/Getty Images
Listen Now

Carnival celebrations are kicking off in Brazil: days of partying and parades, complete with masks, glitter and headdresses.

Traditionally, the whole point of carnival is to be lavish — it’s not a time for holding back. At least, it hasn’t been until now, when Brazil is in deep economic crisis. This year one city near Sao Pãulo, Campinas, can’t fund the usual parade put on by local samba schools.

Fernanda Curi works in advertising production in Sao Pãulo. “The mayor is saying, instead of doing the parade, they’re buying medicine and an ambulance,” she said. “They’re justifying why they’re not doing carnival … because they need to buy what’s really essential.”

She said smaller cities like Campinas will suffer as crowds thin, but the big ones like Rio de Janeiro, where she’s headed this week, will be fine.

Paulo Sotero directs the Brazil Institute at the Wilson Center in Washington D.C. He said Brazilians are generally an optimistic bunch, but these days morale is low. It’s not just the lousy economy. The Zika virus is spreading, and there’s an ongoing government corruption scandal.

“This is no time for Carnival,” he said. “Brazil is facing a very serious crisis.”

He said the country should do less partying, and “more thinking about the future of the nation, because the way we respond to this crisis will very much shape the future.”

Unemployment stands at 10 percent right now and Sotero said it could go up.

But no matter how bad things are, according to Fernanda Curi, most people will party on. She said this is the one time of year Brazilians forget their worries.

“People will just go out there and scream happiness — so this is something that is phenomenal, it’s just amazing what happens here. And it’s going to happen again.” 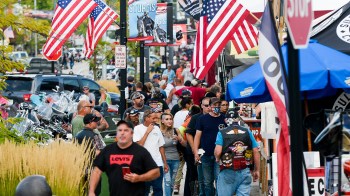