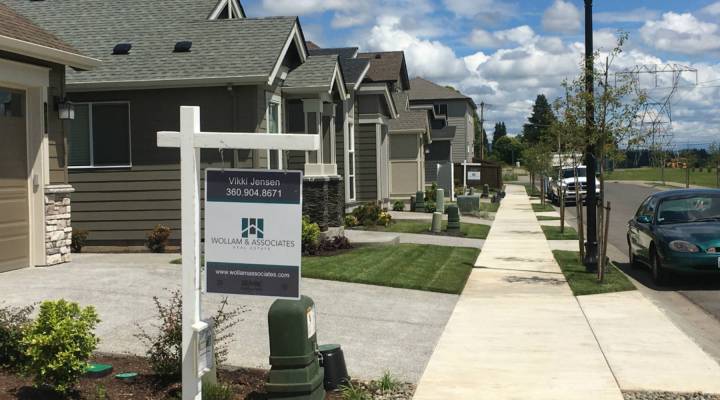 Vancouver, Washington, a bedroom community across the Columbia River from Portland, Oregon, has seen its inventory of homes for sale shrink as the housing market picked up after the Great Recession and available homes got snapped up. First-time home buyers and others looking for affordable homes see the area as an alternative to Portland, where rents and home prices have soared in recent years.

National builder, Pahlisch Homes, is putting up nearly 100 one- and two-story houses in a new development called Koles Landing, bordered on one side by a greenway with picnic tables and play areas. The new homes, densely packed on small lots, are between  1,000 and 2,000 square feet and are priced from $300,000 to $350,000, below the median home price for the Portland metro region.

Realtor Terry Wollam’s firm is marketing the homes, which he said have been selling quickly, sometimes before construction is  finished. “With rents that continue to push up, it is more affordable to buy,” said Wollam. “And so Millennials are coming into the market, making a greater percentage year-over-year of the buyer pool.”

Wollam said that as young people get established in careers and start families, they’re looking for backyards and good schools in the suburbs. But there aren’t enough homes for sale in the area in their price range right now.

With the summer selling season under way, an acute shortage of housing inventory — both new and existing homes for sale — is significantly constricting market activity nationwide, and making homes less affordable for would-be buyers.

Recent housing reports demonstrate the trend. According to the Commerce Department, housing starts fell 5.5 percent in May from the previous month; housing permits fell 4.9 percent. New home construction was also down in March and April. And pending home sales fell for a third consecutive month in May — down 0.8 percent, according to the National Association of Realtors (NAR).

“Ten years ago, the problem in the housing market was lack of buyers,” said NAR chief economist Lawrence Yun. “Today, the problem is lack of sellers. Inventory levels are near historic lows. Consequently, prices are running up too high. Over the past five years, prices have increased by 40 percent, while people’s incomes have only grown by 10 percent. That’s unsustainable, choking off affordability.”

Yun blames the construction side of the market for the increasing imbalance of supply and demand.

“The number one cause of the shortage of inventory at the moment is the lack of home building,” he said.

Robert Dietz, chief economist at the National Association of Home Builders, confirmed that this is a problem nationwide. Ever since the housing crash, builders have been cautious, putting up high-priced custom homes that deliver a solid and reliable profit. They’ve shied away from building cheaper homes on spec in new developments aimed at first-time buyers.

“It’s going to be a challenge for the industry to meet that unmet demand at the entry-level,” said Dietz. “Builders tell us the limits on how fast the industry can grow continue to be concentrated on the supply side: Do builders have enough workers? Do they have enough lots? Do they have access to construction loans? And there’s been a new wrinkle this year— building-material prices. We saw lumber prices jump at the beginning of this year due to concern over lumber tariffs from Canada.”

A new development in Vancouver, Washington, has small homes on small lots priced for first-time buyers, starting at $300,000.

“We’re seeing builders — particularly larger builders — experiment with entry-level housing,” said Dietz. “We’ve seen strength over the last two years in the townhouse-construction market: The typical townhouse is a little less than 2,000 square feet. Townhouses could be an interesting bridge between rentership and homeownership — particularly for millennials. They’re going to be a little more budget-constrained and may be looking for a slightly more walkable neighborhood.”

In Vancouver, Washington, Terry Wollman said that even with a wave of new construction now underway in the region, it remains a seller’s market.

Except — he is finding that a lot of current homeowners are hesitant to put their homes on the market, even if they’ve built up significant equity and would likely be able to sell at or above their asking price.

“There’s limited inventory, so there isn’t necessarily that house that they feel is the next place they want to be, that would give them a move up or a move down,” said Wollam. “So they hold tight because of the lack of choices. It’s still very fresh in our minds what the Great Recession was. Your home — it’s where you live, but it’s also a long-term investment.”