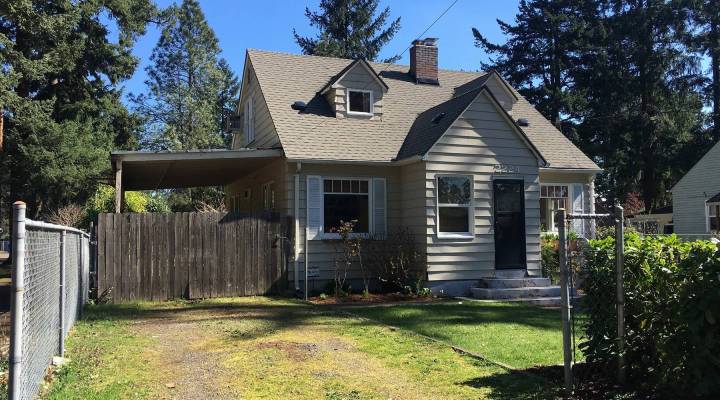 COPY
Lily-Rygh Glen and her wife recently bought this fixer on the outskirts of Portland, Oregon, after searching for years for an affordable first home. Mitchell Hartman/Marketplace

Lily-Rygh Glen and her wife recently bought this fixer on the outskirts of Portland, Oregon, after searching for years for an affordable first home. Mitchell Hartman/Marketplace
Listen Now

The housing market is kicking off for spring on an upward trajectory. Existing home sales rebounded in February after a slump earlier in winter, rising 3 percent on a monthly basis and 1.1 percent year to year, to an annual rate of 5.54 million.

In many metro areas, it’s a good time to sell a home. But it can be a tough market for anyone looking to buy, especially for the first time.

Lily-Rygh Glen, 46, has been house hunting for years. She’s a certified personal trainer in Portland, Oregon, where home prices rose 6.8 percent last year after rising by double digits the year before.

“Ever since I’ve been on my own and finished school,” Glen said, “it’s been a priority to find a place where I can not only feel safe and comfortable, but also start to build some financial security and stop paying someone else’s mortgage, throwing away my own money on rent — money that I’m never going to get back.”

“I don’t think we’re seeing a normal housing recovery,” Berson said. “There’s a significant lack of supply of existing and new homes on the market. If we had normal supplies of both, we’d see home sales significantly stronger than they are now.”

The rebound in home building since the housing crash about a decade ago has been slow, said David Blitzer, chairman of the index committee at S&P Dow Jones. “Back in 2005, we were building houses like crazy — probably two and a half times the current rate,” he said. But the industry was decimated several years later and now suffers from a lack of skilled labor and available lots for development. “A lot of workers retired, they came out of the Great Recession and found other things to do. And on top of it, there’s the phrase ‘not in my backyard.’ It seems like a large portion of the United States is someone’s backyard.”

“It’s a strange problem where people don’t want to put their house on the market because they’re afraid they won’t be able to find another house to move into,” he said.. When people stay put, it pushes prices higher for the limited number of homes that do go up for sale.Meanwhile, the supply of existing homes for sale has become tighter, even as home prices have risen at more than double the rate of inflation for several years, Blitzer said.

There are some hopeful signs on the demand side, said Christopher Mayer, real estate professor at the Columbia Business School. After years of declining homeownership for millennials, “in the last six to nine months, we’re finally starting to see a pickup in homeownership for younger households.”

But he said so far, homebuilders haven’t responded with a lot more production of starter homes.

“In the higher-end markets, we are seeing plenty of construction and larger homes,” Mayer said. “There’s not as much being built in the entry level, and that’s particularly true in places like the South and Midwest, where households at the middle and below aren’t seeing a lot of income growth.”

In Portland, personal trainer Glen and her wife, an electrician, found that the only homes they could afford were older fixers.

Lily-Rygh Glen in her new Portland home under renovation.

They just closed on a three-bedroom, one-bathroom bungalow in a neighborhood of modest homes on the outskirts of the city.

“It was built in 1932, and that’s part of what we loved about it, it’s still got the beautiful windows,” Glen said. “Unfortunately, it hasn’t been loved the way you might want it to be loved. Over time we’ll do more remodeling.” Right now, they’re doing basic repairs.

“Our realtor said it was the worst inspection report she’s ever had,” Glen said.

The couple paid a little under $300,000 for the house and offered an initial bid above the asking price.

They wanted to buy in a more urban neighborhood, near friends and businesses they know, but couldn’t afford even a small one-bedroom house or condo in those areas, Glen said.

“It kind of breaks my heart that I’m in a double-income family, we both work hard, we both have decent incomes, and yet even a basic working-class house in a nice neighborhood was completely out of our range — like, not even close,” she said.