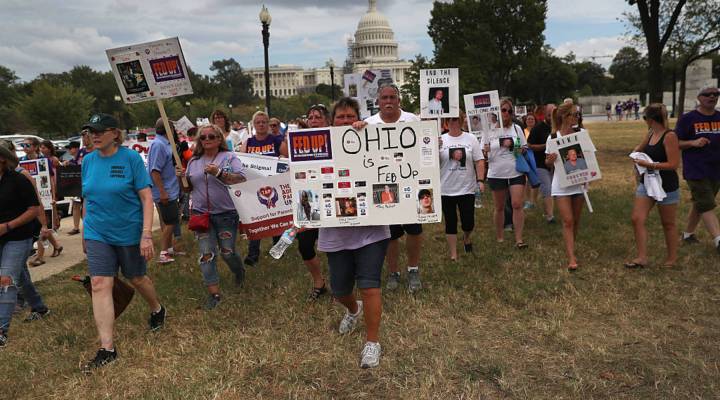 COPY
Activists and family members of loved ones who died in the opioid/heroin epidemic take part in a "Fed Up!" rally at Capitol Hill on Sept. 18, 2016, in Washington, D.C. John Moore/Getty Images

Activists and family members of loved ones who died in the opioid/heroin epidemic take part in a "Fed Up!" rally at Capitol Hill on Sept. 18, 2016, in Washington, D.C. John Moore/Getty Images
Listen Now

In the senate health care bill, there’s at least one issue that comes up again and again: Medicaid spending, and more specifically, how much to cut it.

Medicaid is a pretty big deal in Ohio, which is a Republican-controlled state. Ohio expanded Medicaid under Obamacare, an effort that was championed by Gov. John Kasich, who’s also a Republican. Under this expansion, over 700,000 people were able to enroll in Medicaid.

There’s another thing that makes the Medicaid debate so important in Ohio: the opioid epidemic. According to the Kaiser Family Foundation, Ohio is one of the hardest-hit states.

Marketplace host Lizzie O’Leary spoke to Marlene Harris-Taylor, who covers health care for WVIZ-PBS and WCPN 90.3  Ideastream in Cleveland, to better understand what’s at stake for Ohio should its Medicaid situation change.

According to Harris-Taylor, if the federal Medicaid cuts go through, the situation could get pretty grim.

“Some 500,000 people would probably lose their coverage from the Medicaid expansion,” Harris-Taylor said. “And even Ohio Sen. Rob Portman, who’s a Republican, has serious reservations about this expansion right now. He’s one of the holdouts, because he’s really worried about this opioid crisis. And he feels like cutting people off of Medicaid when they have been able through this expansion to access treatment will be terrible. It’ll be a big setback for the state.”

Listen to the full interview to hear more about Ohio’s Medicaid situation and what the future might look like under the current Senate health care bill.