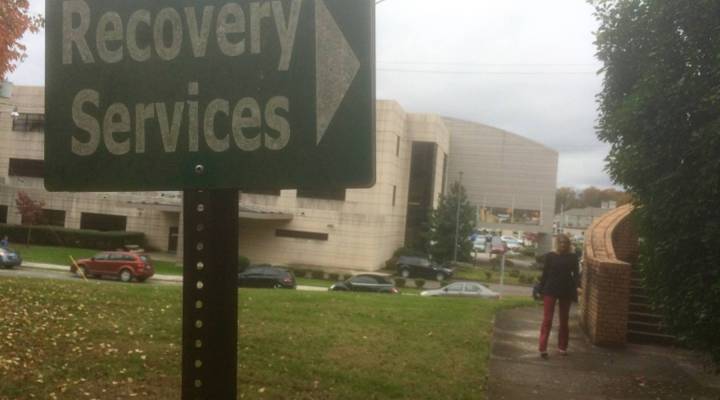 Tiffany Hall of rural Northeast Tennessee knows the problem of drug-dependent babies better than just about anyone. She’s been on both sides of the glass in the neonatal intensive care unit — first as a nurse, then as a mother on drugs.

When a mother is on heroin, high-powered pain pills or even prescribed drugs meant to step down off opioids, her child can be born with a condition called neonatal abstinence syndrome (NAS). NAS continues to afflict more and more newborns in Tennessee, which has one of the highest rates in the country.

A group session where young mothers talk about their opioid addictions. Many participants had a baby with NAS.

The babies cry uncontrollably. They shake. They scratch themselves. They’re going through withdrawals from the drugs their mother is on, which is what happened with Hall.

“So then after losing my job in the NICU (Neonatal Intensive Care Unit), I end up having two babies in the NICU with neonatal abstinence syndrome,” she said. “You stand there, and you watch your own child go through something you’re not willing or wanting to go through yourself, and you have to stand there and watch that, knowing that you did that to them, and it’s awful.”

NAS usually means an expensive stay at the hospital, with the baby being closely monitored and getting tiny doses of methadone.

Justin Lanning, who founded a company called 180 Health Partners, sees business potential. The startup is trying to reduce the likelihood that babies are born drug-dependent. The cost of caring for those  infants averages $66,000 over the first four months of life, according to the National Institutes of Health. By comparison, a baby born without NAS costs $3,300. “So there’s your savings,” Lanning said. “That’s it. Our model is that simple.”

Insurance companies are  interested in driving down costs, particularly government-subsidized programs like Medicaid. If 180 Health Partners keeps a baby out of the NICU, the insurer pays them a cut of the savings.

The company has signed contracts to basically do whatever it takes to help a mother step down off pain pills or heroin — whether that means guiding her through detox center wait lists or just helping find a stable place to live.

And Lanning said his secret sauce may be the workforce: They’re not social workers or counselors. They’re mothers who have previously dealt with addiction.

“I definitely attended the school of life,” said Melanie McCarter of Knoxville, Tenn., who had a stillborn child while she was abusing opioids.

While the startup is highlighting its unorthodox hires, it also has some industry heavyweights. Its chairman is the long-time head of Tennessee’s Medicaid program, Darin Gordon. Former Senate Majority Leader Bill Frist is on the company’s board.

The firm is starting its work in East Tennessee, where there’s plenty to do. The number of drug-dependent babies continues to rise, despite a statewide focus on the issue over the last few years. NAS experts are keeping an eye on the company. Neonatologist Stephen Patrick of Vanderbilt Medical Center said his primary concern is that there may be too much focus on detox.

“I think the literature suggests we should be cautious about tapering off in pregnancy because of high relapse rates,” he said. “So it’s something I think we should be watchful.”

But Patrick said the startup’s mere existence confirms that pregnant women struggling with an opioid addiction need more attention than they’re currently getting.