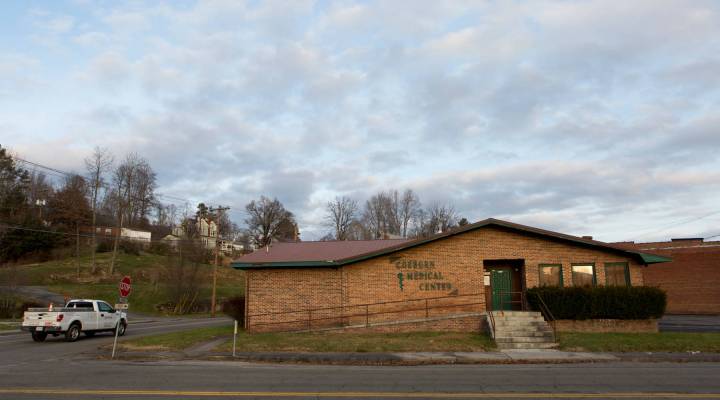 Dr. Gurcharan Kanwal lost his medical license after an investigation by the Southwest Virginia Drug Task Force found that he was running a "pill mill," or distributing drugs without a legitimate medical purpose, out of this building in Coeburn, Virginia. Julia Rendleman for Marketplace
The Uncertain Hour

Dr. Gurcharan Kanwal lost his medical license after an investigation by the Southwest Virginia Drug Task Force found that he was running a "pill mill," or distributing drugs without a legitimate medical purpose, out of this building in Coeburn, Virginia. Julia Rendleman for Marketplace

The headline number is frightening in itself: Nearly 50,000 Americans a year are dying from opioid overdoses.

It’s the deadliest drug epidemic this country has ever faced, and this season on The Uncertain Hour, we’re talking with the people affected by it and trying to figure out how it might end.

But those conversations can’t always capture the enormity of the crisis, and there’s more context to that overdose number — opioids aren’t the only drug killing Americans. Exploring the data can tell us a lot about how this epidemic started and where it’s going.

Opioids have been easy to get

For a lot of people, opioid addiction starts in the doctor’s office after a pulled tooth or a broken leg. A lot of pills that are sold on the street start out as legitimate prescriptions and are resold by middleman dealers.

Explore the map below, created in collaboration with APM Research Lab, to see how your community compares. Additional notes below.

Street drugs are getting cheaper and more pure

Abusing prescription pills can often turn into abusing other drugs, like methamphetamine or heroin, especially as law enforcement shuts down clinics for overprescribing.

Over the past several decades, anti-drug policy in America has favored attacking the supply. Give drug dealers long prison sentences, the thinking went, and the ones who are left will charge more. If the price goes up, fewer people will get addicted.

But drugs don’t follow the conventional wisdom of economics. From 1981 to 2012, the street prices of heroin and methamphetamine dropped, while the drugs themselves became more pure.

Researchers from the University of Pittsburgh, Northwestern University and the Centers for Disease Control and Prevention analyzed hundreds of thousands of overdoses from the past 40 years. They found the overall rise in fatal overdoses since 1979 has been “remarkably smooth” and predictable.

But when you break up overdoses by individual drugs, overdoses become much harder to predict. The authors write that this contradiction indicates the overall mortality rate is maintained by the ebb and flow of other “subepidemics.”

For example, cocaine and prescription opioid overdoses were growing in tandem for the first five years of the new millennium. Cocaine deaths fell precipitously, only to bounce back after the peak prescribing years for opioids, the early 2010s. After that peak, synthetic opioids and heroin led to a surge in deaths.

What can you do about it? How does an epidemic end? That’s what we’re trying to figure out on this season of The Uncertain Hour. Listen here or wherever you get your podcasts.

Additional notes on the above map:

Source: IQVIA Xponent via U.S. Centers for Disease Control and Prevention. Data are based on a sample of approximately 50,000 retail (non-hospital) pharmacies, which dispense nearly 90% of all retail prescriptions in the United States. Includes initial or refill prescriptions dispensed at a retail pharmacy. Mail-order pharmacies are not included.

Zero values represent missing data. This may indicate that the county had no retail pharmacies or none sampled, or the prescriptions were filled in an adjacent county.