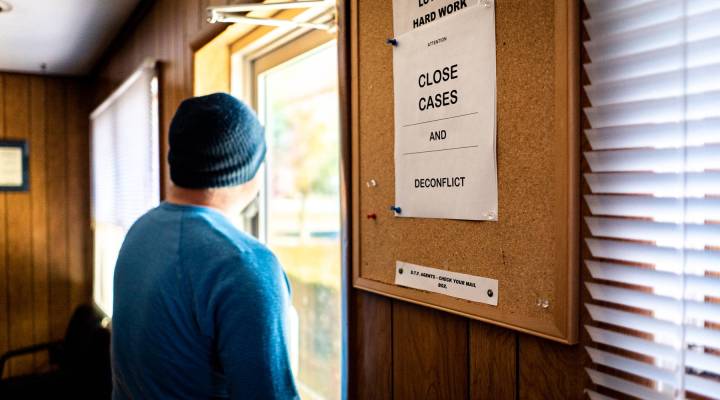 Bucky Culbertson keeps his cover intact by changing his clothes — several times a day, some days — and switching up his facial hair. There are rumors he wears a wig, but he denies that. It’s hard to tell when he’s wearing a ball cap and sunglasses.

We’re driving around rural Wise County, Virginia, in a big black truck with tinted windows. Wise is in the Appalachian mountains, a region that’s considered to be ground zero for the nationwide opioid epidemic. One community here had five prescriptions for every man, woman and child in 2015. But it didn’t used to be this way.

“Used to, this town would be completely full of nothing but coal trucks, going and coming,” Culbertson says. He started driving one right out of high school. “Best job I ever had … just peaceful. Looked at the mountains, hum of that motor. It was dangerous, but it was fun.”

Culbertson is 42 now, and his career has closely followed the booms and busts of the county where he grew up, all the way through his career change to buying narcotics undercover for the Southwest Virginia Drug Task Force.

Wise County is rural, made up of many small towns of a few thousand people. It’s a beautiful place, with roads that wind through mountains thick with trees. You can stop at overlooks with views for miles and drive on rundown but charming main streets. There are many neat little homes with rocking chairs out front.

The population here is almost entirely white, and it’s always been poor. About 20 percent of people live below the poverty line. People here tend to be sicker and die younger than people in northern Virginia.

Many families have lived in the same towns for generations. Their hometown pride has been on display every weekend of every summer for the last 55 years when community actors perform “The Trail of the Lonesome Pine,” a play depicting the region’s origin story.

The play is based on the historical novel of the same name, and it’s spawned multiple movies, including a 1936 version starring Henry Fonda. Some of the players have been in this local production for over a decade. It tells the story of how coal was discovered in the Appalachian mountains.

Coal essentially built Wise County’s economy, bringing an influx of new jobs. But today the coal industry is a sliver of what it once was. Tax revenue for the county from coal is just a tenth of what it was a decade ago, and the population is declining.

After Culbertson was laid off from his coal job in the late ’90s, he started a lumber business with his dad. They had a sawmill, a woodshop and a trucking business. The father-son team had about 20 employees at their peak, but now there’s just one: Culbertson’s 62-year-old dad.

What did them in wasn’t globalization or automation, it was finding sober workers. Some days Culbertson said he was sending home three or four people, then trying to make up those shifts himself as best he could.

Eventually, Culbertson said, it seemed less stressful to leave lumber behind and take on Wise’s other big business: opioids.

“All I wanted to do is work narcotics, because of all my friends that have overdosed and died,” he said. “Or they’re living in poverty because of that addiction. It affects you. It does.”

When we interviewed Culbertson, he took us to a medical clinic that the cops had just raided. The doctor who ran it was charged with more than 100 counts of prescription fraud, conspiracy, Medicaid fraud and more. A bust like that was months in the making.

Dr. Gurcharan Kanwal lost his medical license after an investigation by the Southwest Virginia Drug Task Force found that he was running a “pill mill,” or distributing drugs without a legitimate medical purpose, out of this building in Coeburn, Virignia.

Most drug cases in this area are made with informants, low-level dealers Culbertson buys drugs from and flips to work his way up to bigger players.

“If you’re going to prosecute the devil, you’ve got to go to hell to get the witnesses,” he said. “That’s just kind of the way we have to look at it.”

But it’s not a perfect solution. Shutting down a clinic can disrupt the supply of pills for dozens, even hundreds, of dealers, but other illegal drugs like heroin and methamphetamine often fill the void.

Meanwhile, the county’s resources are strapped. The regional jail is 14 years old, and it’s already added an extension, because the inmate population has more than doubled. Wise County’s overall spending on the jail has tripled in the past decade. It’s a revolving door, Culbertson said.