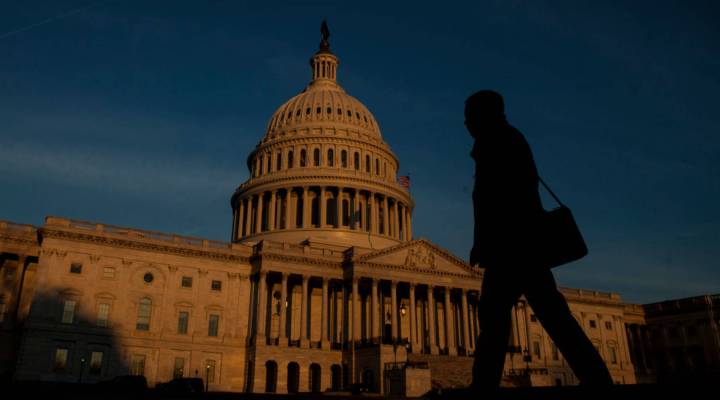 COPY
"Ordinary lawmakers are pressed for time, and often they find themselves out of their depth no matter how smart they are or how experienced they are," says Max Ehrenfreund, a Washington Post writer. Zach Gibson/Getty Images

"Ordinary lawmakers are pressed for time, and often they find themselves out of their depth no matter how smart they are or how experienced they are," says Max Ehrenfreund, a Washington Post writer. Zach Gibson/Getty Images
Listen Now

It’s another busy week on Capitol Hill. Just a few of the items on the agenda include Paul Ryan making a speech on tax reform and a hearing on the use of military force in Syria, and over in the Senate, getting the Republican health care bill done by the Fourth of July recess. But Max Ehrenfreund pointed out in the Washington Post that even with Congress’ ambitious legislative goals, there are fewer staffers both in Congress and in the research agencies that support the lawmakers helping them with all the work there is to do. He talked with Marketplace host Kai Ryssdal about why people who work on Capitol Hill are leaving and what that means for lawmaking. The following is an edited transcript of their conversation.

Kai Ryssdal: What does it mean when Congress is as busy as it is this year, and it has, as you say in this piece, so many fewer people doing the staff work than it used to?

Max Ehrenfreund: Essentially, what it means is that ordinary lawmakers are pressed for time, and often they find themselves out of their depth no matter how smart they are or how experienced they are. It takes a lot of work to make a law. And the concern is that this could result, at some point, in a reduction in the quality of the law.

Ryssdal: One of the things you point out is that while rank-and-file members are seeing their staff allowances shrink. The leadership, Speaker Ryan, Sen. McConnell, they are seeing an expansion in their staffs.

Ehrenfreund: That’s right. If you look over the past 30 years or so, the leadership staff has increased by about 50 percent, give or take. And that is especially a result of changes made by former Speaker Newt Gingrich. He took actions that really increased the power of the leadership by increasing their staffs, and he also reduced the other organizations that are affiliated with Congress and part of the whole legislative enterprise, such as the Congressional Budget Office, the Congressional Research Service, the Government Accountability Office and other bodies and entities that provided rank-and-file lawmakers, particularly in the House, with a sense of what’s really going on.

Ryssdal: You say in this piece someplace that one of the primary reasons people leave is that they want better pay. And I guess the question that comes out of that is: Who is doing the leaving? It’s not the young ones right out of college who are having a great time working on Capitol Hill, it’s the mid-grade and the more experienced staffers who are taking off, right?

Ehrenfreund: So, that’s a concern for lawmakers. You know, they noticed that just seems like once people really start to figure out how the place works and what they’re doing, that’s when they feel like it’s time to start a family or get a place of their own, move out of the city. Pay is going down and the cost of living is going up, and so oftentimes they leave Congress for places where they can make more money.

Ryssdal: Does this then necessarily, the decline in staffing levels, does that necessarily give lobbyists and outside groups more power?

Ehrenfreund: It often does. I mean, if you think about it, you might be working in the House, and you might be a junior member of the staff, and you’re used to asking your boss basic questions about how things work or you know you just need to figure something out, and then your boss leaves for K-Street and joins a lobbying firm because that person can make more money there. Then, you’re more likely to call a lobbyist for help.

Ryssdal: If they didn’t know about it before, if they weren’t willing to talk about it, certainly now that it’s been in the pages of The Washington Post it’s more of an open secret on Capitol Hill. Any sense that this is going to change any time soon?

Ehrenfreund: That is a very interesting question, and I think the process involving the health care bill in the Senate right now is going to be a great experiment to see where lawmakers draw the line. Because really, McConnell, the majority leader, the Republican leader in the Senate, he is holding all the cards. And that’s what the concentrating power in the leadership has done for Congress.