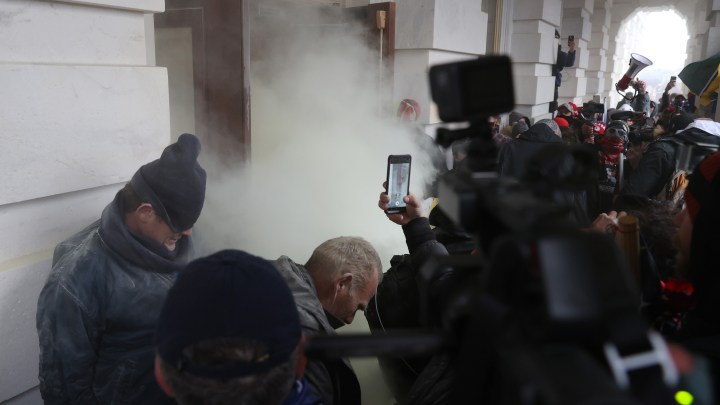 COPY
Tear gas is deployed against pro-Trump protesters attempting to enter the U.S. Capitol on Wednesday. The disruption of government unnerved some business leaders, who value stability. Tasos Katopodis/Getty Images

A demonstration in support of President Donald Trump escalated into a riot Wednesday, when protesters broke into the U.S. Capitol building during a congressional proceeding to certify the November election of President-elect Joe Biden.

Lawmakers were evacuated, and the Capitol Police deployed tear gas in the Capitol Rotunda. One person was fatally shot and at least one explosive device was found, the Associated Press reported.

Sudeep Reddy, managing editor at the website Politico, joined Marketplace host Kai Ryssdal to discuss the events in Washington and how business leaders are reacting to them. An edited transcript of their conversation follows.

Kai Ryssdal: You have seen the video; you have heard the audio. The United States Capitol building has been occupied by supporters of President Trump, spurred on by months of his lies about election fraud. And we will, I promise you, talk about the economics of American politics right now —because after last night in Georgia, Democrats control the Senate. But to start: Sudeep Reddy, managing editor at Politico, on the news of this day.

Ryssdal: Wild, wild day. So, super quickly, since this is a very emotional day, what’s your gut right now?

Reddy: It’s shocking to watch all of this, but also, sadly, it’s not surprising. We’ve been all wondering for months, really for the last four years, whether something like this might happen. And now it did, two weeks before inauguration. It’s surreal to be on Capitol Hill listening to sirens for hours and hours, and then to just watch the Capitol building — I’ve walked those halls thousands of times. And it always struck me how intense security tends to be, and how intense security was this summer when there were other protests around D.C. So to see this happen, it’s just kind of mind-boggling to see happen on a day that they should have been prepared for.

Ryssdal: Yeah, for sure. Companies and CEOs have started to weigh in. Jamie Dimon from JPMorgan Chase and the Citibank CEO have said they deplore violence and they want order restored. And then this afternoon, an amazing thing happened. The National Association of Manufacturers — a major lobbying group and supporter early on of President Trump — issued a statement in which they called on Vice President [Mike] Pence to assemble the Cabinet and invoke the 25th Amendment, thus removing the president. Talk about that for a second, would you? Because that’s just wild.

Reddy: It is wild, the words that Jay Timmons, the head of the group, used. He said what was happening is chaos and sedition, and he was calling out the people who might be anywhere willing to support it, even in the slightest sense. He’s probably going to take some heat for it and have a backlash, but it does show how severe things have gotten, for a business group this large, to have this many business constituents, to have to send a statement like this. Look, a functioning economy at its core rests on a normal, functioning government and the basic rule of law. We’ve watched scenes over and over in barely functioning countries where people stormed government buildings, and you wonder, like, what on earth is going on and how are they going to have a functioning system? And it’s just — it’s obviously disturbing and embarrassing to see that happen in the United States. And it has pretty profound implications for the functioning of our country and the business of government that still has to go on.

Ryssdal: Rule of law we will get to in just a second. But what I do want to point out here is that Wall Street watched what was happening at the United States Capitol today and sent the Dow and other indices to record highs. What?

Reddy: It was wild, and you know, Wall Street reacts to things often late after waiting for a while. You can see a few ticks if you look at the charts. When people had actually entered the Capitol building, you saw some gauges in the stock market start to sell off. I imagine that people who were ready with their fingers on their keyboards to do something in that moment as they watch those scenes. But these are, were initially protests, before it became riots and mobs of people entering the Capitol. And so Wall Street has seen that many times before. It’s just, I don’t think anybody on Wall Street or in business has really grappled with what it means to see a national system this broken to get to the point of this, where a president is encouraging his protesters to go and storm the Capitol building.

Ryssdal: It also has to be said, they were probably reacting — the markets were — to news out of Georgia and the idea that with Democrats now in charge of government, the odds of some more stimulus — not huge, probably, because it’s a really tight Senate — but there will be more stimulus coming later.

Reddy: It was hard to find who the losers were on Wall Street. There were a few tech stocks that were selling off early, but not many. And it is true that having the 50 seat gain control, with the vice president 51, being able to pass stimulus. It does mean that you’re not going to necessarily see a cliff in aid to people who are struggling. You’re going to actually be able to get aid out through the economy over the course of the year, which is good for being able to defeat the virus and not having to wreck our economy because the virus is getting worse in a lot of places. And that’s the last thing that we have to get through to be able to move on. But there are all sorts of other things on the table now — infrastructure, other kinds of programs. But there will be a different kind of reaction at some point when inflation theories start taking hold and Treasury yields start surging again, as they often do in these cases.