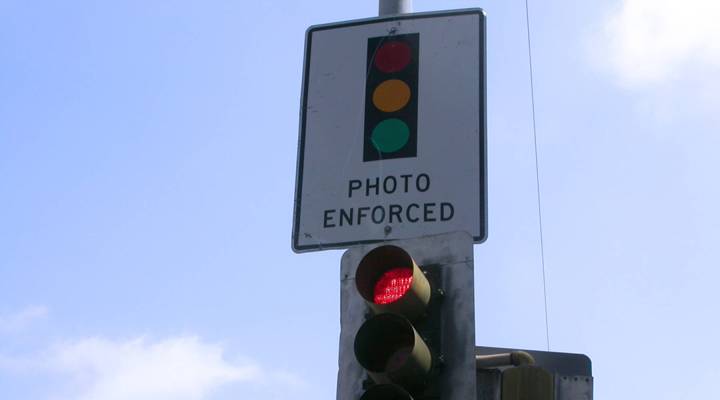 COPY
A red light camera warning for motorists in Los Angeles. The state is considering a proposal to reduce the cost of a traffic ticket for low-income residents. Larry Buhl

A red light camera warning for motorists in Los Angeles. The state is considering a proposal to reduce the cost of a traffic ticket for low-income residents. Larry Buhl
Listen Now

The California Legislature is considering a proposal to link the cost of a traffic ticket to a person’s ability to pay. Supporters say if it becomes law, it will keep minor traffic violations from pushing low-income California drivers deep into debt. And, it could help the state recoup tens of millions of dollars in delinquent fines that people just can’t afford to pay.

California has some of the country’s harshest penalties for minor traffic violations. Thanks to a host of automatic surcharges, a $100 ticket actually starts out at $490. Then late fees can pile on. Failure to pay on time raises the price to $800, and then $1,100, and so on.

Paul Tepper, executive director for the Western Center on Law & Poverty, said that a ticket for, say, not signaling, can start a person on a downward spiral.

“If you can’t pay the ticket, courts commonly suspend your license,” Tepper said. “Without a license, people can’t go to work and frequently lose their jobs. If they’re not working, they can’t pay their ticket.”

A bill that passed the California Senate recently lets judges reduce fines for people earning up to 250 percent of the federal poverty level — about $30,000 a year for a single person. It offers them payment plans to keep their licenses. The proposal covers minor moving violations; penalties for DUI or reckless driving are not affected.

Senators who voted against the bill did not respond to a request for comment. But critics say ending automatic license suspension might make it less likely violators will pay.

The bill’s author, Sen. Bob Hertzberg, said people were more likely to pay under a recent two-year traffic amnesty that ended in April.

“We got a quarter of a million people in California who got their licenses back, and the state got money back that it otherwise wouldn’t have,” Hertzberg said.

Supporters of the measure point out that when drivers keep their licenses — and their jobs — the state collects more income taxes and pays out less in unemployment.

Donald Shoup, a research professor of urban planning at UCLA, said the bill is about giving low-income Californians a break.

“It’s just bringing traffic fines into line with everything else we do about helping poor people,” Shoup said.

Gov. Jerry Brown said the current law could send people into a “hellhole of desperation.” He supports the change.