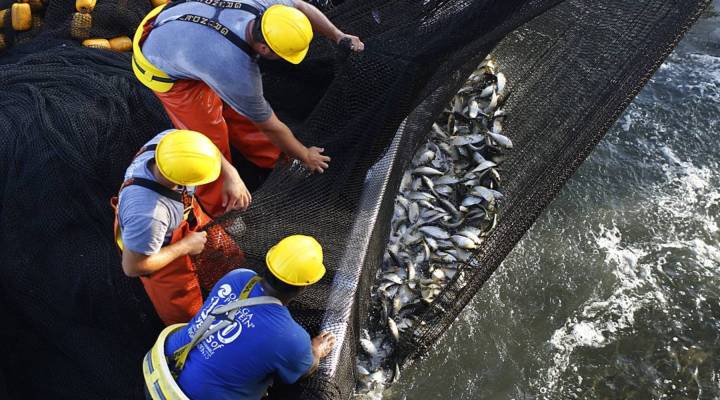 Morro Bay, a town on California’s central coast, touts itself as a fishing community. Fishing has been vital for the town’s economy, but it collapsed at the turn of the century because of overfishing and subsequent federal regulation.

Fishermen were offered some relief money for their losses, but the industry was left for dead. Now, things are on the upswing thanks to an unlikely partnership between local fishermen and environmental group The Nature Conservancy.

Bob Maharry’s been fishing in Morro Bay for 42 years and said his profession fills him with a sense of community. He watches fondly from the dock as a boat pulls up carrying 50,000 pounds of wiggling, purplish squid and the crew prepares to unload it.

“When you fill the boat up or you make the right move, and you hand a kid a big paycheck for the week and he thanks you, there’s a lot of satisfaction in that,” Maharry said.

Maharry blames regulation for the downturn in Morro Bay’s fishing industry. It peaked in the ’80s, when everyone simply hauled in as much as they could. The late ’90s brought strict federal catch limits on West Coast groundfish — species like cod, halibut and flounder, among many others. As a result, some fishermen sold their boats and others left for new ports. Maharry stuck it out, going after different fish that didn’t face such regulations.

“It is what it is,” he said. “If you’re going to survive in the fishing business, you have to be able to adapt.”

One adaptation has been to learn to work with conservationists who’ve taken an interest in Morro Bay. The Nature Conservancy, a powerful nonprofit, became interested in the area more than a decade ago. Known for buying up land to protect it from development, the group’s first strategy was to buy up about half of all the available groundfish licenses.

A fishing vessel docks in Morro Bay after catching 50,000 pounds of squid.

Michael Bell, director of the oceans program for TNC in California, describes the goal:

“There were some within The Nature Conservancy that thought these permits should just go on the shelf and then that would be a conservation outcome. Less fishing,” he explained.

The idea was to limit trawling — a destructive way to fish where weighted nets drag the ocean floor. But then TNC came to understand that even if local boats were sidelined, other bigger ones from elsewhere could come in and trawl. So the group changed course, figuring it would be better to improve fishing practices at the local level.

“If you’re going to change fishing, there need to incentives,” Bell said. “And the incentives available to us are really market incentives.”

It was a totally different approach. The group partnered with local fishermen instead of blocking them. The Nature Conservancy met with fishermen and local politicians to gather input. It then established a separate nonprofit, the Morro Bay Community Quota Fund, to redistribute the fishing licenses it had bought.

Bill Blue is one fisherman who signed on. Blue’s made a living on the water for more than 40 years, fishing for crab, salmon, albacore and almost anything else available. His most recent boat, named the Brita Michelle, is perfect for catching groundfish. But to get into the groundfish game, Blue needed a license. He decided the easiest way was to apply for one through the Quota Fund — even though it meant an interview with a board of fishing experts, which made him nervous.

Bill Blue’s boat, the Brita Michelle, is docked in Morro Bay. Blue fishes for groundfish as a member of the Morro Bay Community Quota Fund.

“I was skeptical at first, and I think that it was a learning process on both sides,” Blue said. “They never made promises that they didn’t keep, but they made assumptions.”

Assumptions like the ideal fishermen in their 60s and 70s would be open to reporting their catch online and bring iPads on board for that. But Blue has indeed adapted and now uses an app called eCatch.

Dwayne Oberhoff, executive director of the fishing collective, uses the eCatch data to track fish populations in Morro Bay and to track the fishermen’s earnings.

“Since 2006 until today, there’s been about 6 million pounds of fish landed worth, at the dock to the fishermen that have landed it, about $8.1 million,” Oberhoff said.

A sustainable fisherman’s collective is something of an oxymoron — much of the profession’s appeal is being alone on a boat, minding your own business. But Oberhoff and his colleagues see bigger, investor-backed boats with more destructive nets taking over West Coast fishing. And banding the little guys together is their best bet for a healthy ocean and healthy local economy.