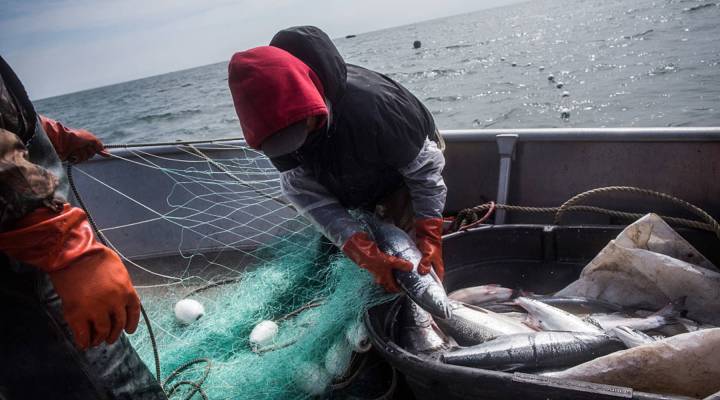 The Alaskan seafood industry is one of the many industries with its eyes on the back-and-forth between the U.S. and China. Seafood was one of the U.S. exports to get slapped with a retaliatory tariff from China, and that’s an issue for Alaska seafood producers because a lot of their seafood exports are sent there.

But in this installment of our on-going series My Economy, we’re looking beyond the news headlines to see how people are actually doing. And there are a variety of things that might be on an Alaskan fisherman’s mind right now, as fisherman Hannah Heimbuch describes from Homer, Alaska.

My name is Hannah Heimbuch. I’m a commercial fisherman from Homer, Alaska. My brother and I are drift gillnetters. We fish for sockeye salmon. We grew up deckhanding with our dad on his boat in a couple different areas in Alaska. And two years ago we decided to invest in our own operation. You know, we’re in our early 30s and kind of looked at each other and were like, “Well, I guess we’re in this together.”

Probably our biggest annual investment is our boat payment. That runs about $11,000. We also have permit payments, that’s another $5,000. And then after that you have the basic maintenance. You know, we spend a few thousand dollars upgrading. So we have a boat that’s in tip-top shape, but we needed to make more than $20,000 to break even this year. We did not come close to that.

We’re looking at a record downturn for our fishery and I think we put in less than 5,000 pounds of sockeye this year, which is definitely a disaster season. We’ll be making our boat payment not from the boat business but from our other work. You know, for instance, my brother is doing winter’s squid fishing in California. He did that last year and he’ll probably do that again this year. The rest of the year I work in fisheries policy. If I’m not able to catch fish, I go talk about it.

Running my own business, especially one that gets me out in a wild landscape, you know, I think that really satisfies that need to be independent and self-reliant. Probably the best way to put it is, you know, sometimes it’s not always fun, sometimes you’re physically miserable or worried, but I really like who I am when I’m fishing.