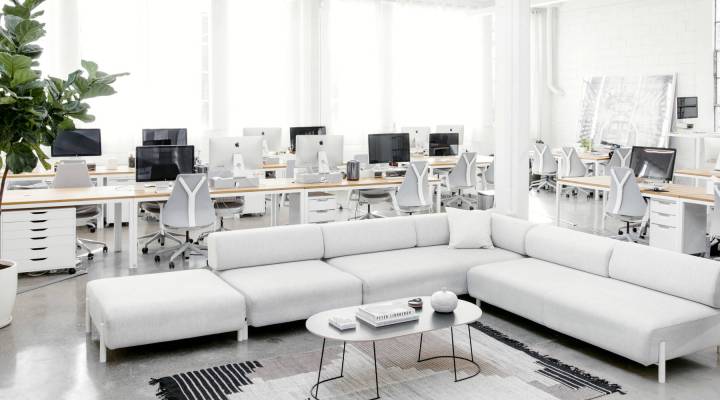 Graduating into the Economy

COPY
Everlane's San Francisco headquarter is based in the downtown Mission District. CCHAVARRIA
Graduating into the Economy

This week, Marketplace Weekend is all about life after college. In our series, “Graduating into the Economy,” we have stories and advice for recent grads — everything from career and credit basics to dream outfits, houseplants and homes.

Walk into retail company Everlane’s headquarters in San Francisco’s Mission District and the decor is in line with the brand’s simple aesthetic. Airy open spaces along with lots of trendy houseplants, surrounded by white walls and blonde wood. Everything in the office is  Instagram ready at all times.  That includes the staff, dressed head to toe in the muted grays, olives and navy blues you see on Everlane’s website.

As a result, people accidentally show up for work in the same outfits all the time, according to Alyssa Bergerson, the communications lead at Everlane.

“Whenever someone was wearing the same thing, we’d take photos of them and call it ‘Everlane Twins,'” she said.

The unplanned uniform situation has probably happened in your office, too. After all, fashion is all about copycats. There are no copyrights on designs, which makes it really easy for popular styles to make their way from high-end brands down to fast-fashion stores.

In many ways Everlane is almost made to feel like a makeshift uniform, and not just for its employees, says the company’s head of social media, Red Gaskell:  “We make clothes so that you can focus on doing great work, and you don’t have to worry too much about what you look like.”

The company is known for selling office attire or causal wear that are simple in style, and in reality, could be sold anywhere: White t-shirts. Navy work pants. Gray backpacks. Nondescript black hoodies.  In fact, Everlane’s biggest competition comes from the likes of  J. Crew’s sister brand Madewell and the Japanese retail company Uniqlo, both of which rely on selling the basics. It’s a style that is all over social media, which can be a marker of millennial tastes.

“Things like Instagram have so much power because millennials also speak in pictures, more than words,” said Curt Cuscino, founder of HypeLife Brands — a marketing agency that helps companies target millennials.

What millennials care about is key to Everlane’s success. According to their data, over 30 percent of Everlane customers are between 18 and 35 years-old, and 95 percent have some college education. As millennials get older, and their wallets get a little thicker, pleasing this customer base will become more important.

Of course, not everyone fits into the Everlane market. There are plenty of people who are unwilling or unable to pay a premium for transparency, especially for clothes billed as basics.

And while millennials are notably brand loyal to begin with, what really sets Everlane apart is more about ethics than product.

“I was in search of a sustainable clothing company for a long time and every time I found one it was ridiculously hippy…and it was cool to see [Everlane] have modern styles,” said Jana Ivanov, a 20-year-old customer, as she was shopping at the company’s flagship brick and mortar shop.

Everlane’s business model is built on what they call “radical transparency.” They disclose information like the price of labor and materials that go into each product. They also provide information on the factories and workers who make their products. Even the bathroom at their headquarters is a reminder of their ethical practices. Over the speakers in the bathroom are light snipping noises with little signs in the stalls and by the sinks that read, “The Sound of a Tee” with information about the Los Angeles factory that produces their t-shirts.

These signs are in the stalls and near the sink in the bathroom at Everlane’s San Francisco headquarters.

“It’s like with the Farm-to-Table movement,” said retail journalist Elizabeth Holmes. “People want to know where their food came from.”

But in the case of this ethical movement, she said, “People want to know where their clothes came from.”

If Everlane is betting right, its transparent pricing could be the next organic kale, but whether or not its consumer base can keep shelling out for $35 tees is another story.

Still haven’t had enough of Everlane? We made a game for you. Think you can tell the difference between Everlane’s San Francisco headquarter and the set of the Nancy Meyers film “The Intern”? Click here to find out. 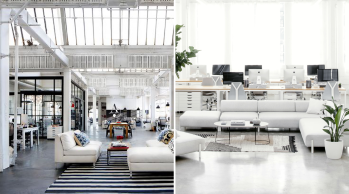 Is this Everlane’s headquarters or is this Nancy Meyers’ "The Intern"?

Graduating into the Economy
Tags in this Story
Share this Story