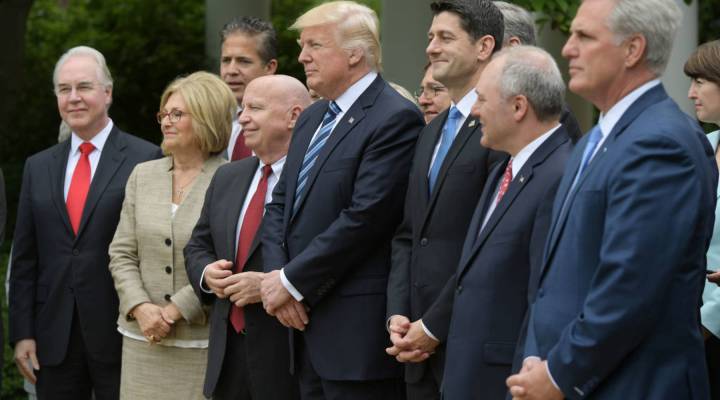 COPY
President Trump and Speaker of the House Paul Ryan in the White House Rose Garden after the House of Representative passed the health care bill on May 4. MANDEL NGAN/AFP/Getty Images

President Trump and Speaker of the House Paul Ryan in the White House Rose Garden after the House of Representative passed the health care bill on May 4. MANDEL NGAN/AFP/Getty Images
Listen Now

There’s finally a price tag on the amended American Health Care Act that was passed by the House of Representatives almost three weeks ago. The report from the Congressional Budget Office is sort of like the report card for the bill. It explains what it’s going to do and how much it’s going to cost. The CBO score for the previous iteration of this bill, which never made it to a vote, estimated that 24 million more Americans would be without health insurance by 2026. Marketplace host Kai Ryssdal talked through today’s score with Sarah Kliff at Vox. The following is an edited transcript of their conversation.

Kai Ryssdal: So a couple of headline numbers to get out of the way: How many more people will be without health insurance under this law than under current law?

Sarah Kliff: Twenty-three million is kind of the big headline number. And as you mentioned, that’s really similar to the last report. You didn’t really see any big policy changes. So again, you’re seeing a really big loss in coverage under the Republican plan.

Ryssdal: What about then the second headline number, which is going to be money saved? Deficit reduction-wise.

Ryssdal: OK, so mostly marginal changes. If I’m Paul Ryan, the Speaker of the House, what am I thinking this afternoon? How am I feeling?

Kliff: I don’t I’m feeling very great because this just isn’t a good report for Republicans. I think their report is very similar to previous ones except in one key way: The CBO really pushes back aggressively against some of the claims that Republicans have made about their plan. There’s this one paragraph in the in the report where they say that people who are less healthy — and I’m reading from the report — would ultimately be unable to purchase comprehensive insurance. That’s just a kind of devastating finding that really pushes back against this idea of protecting people with pre-existing conditions.

Ryssdal: And also, the CBO uses, again from the report, language talking about destabilizing the market.

Kliff: Yeah. So, this is one other thing that’s new in this report. CBO estimates that one-sixth of the country will live in areas that would be destabilized because of these new waivers that exist in the Republican plan that let states opt out of protections for people with pre-existing conditions. So, you know, that would be a big change in what CBO is saying is if you are one of those one in six people, you might not have access to affordable health insurance if you’re a sicker person.

Ryssdal: Now this thing is going to go to the Senate, and it’s worth a mention here that the Senate basically is going to take this and say, “Thanks very much,” put it in a corner and write its own bill. Yeah?

Kliff: Yeah. So they have their own working group. You know, I am curious to see how this lands in the Senate, if they want to get to higher coverage. But I think they really want to say, “Hey, that’s the House bill. We’re building our own thing. Don’t throw that unpopular bill on us. We’re starting from scratch.”

Ryssdal: To the issue of consumers in this economy and the purchasing of health care, the whole thing with the Republicans in the House was, “We have to get the premiums down, we have to get people to be able to pay for the insurance that they want to buy.” This bill still does that, and the CBO has taken all that into account, right?

Ryssdal: And it would do that basically by letting people just buy the catastrophic, right? And getting rid of or not forcing them to buy what are called essential health benefits.