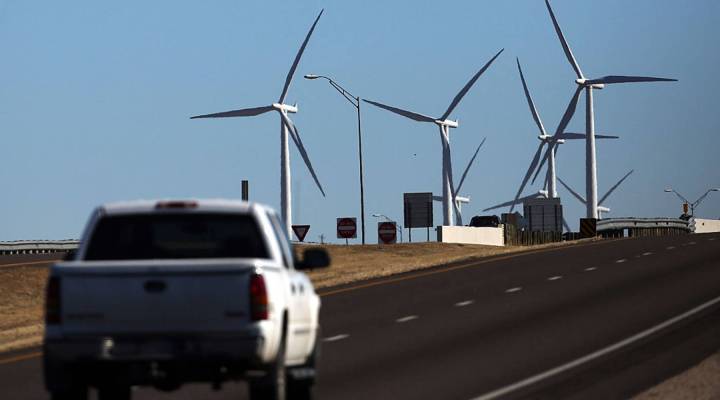 John Dudley lives in Comanche, Texas, and wears a couple of hats: He’s a cattle rancher and a wind farmer. We met on his 20,000 acres in the Texas hill country. His land holds more than half of the 87 turbines that make up the vast Logan’s Gap Wind Farm. His brown Herefords roam among the giant stalks, as they spin up to 40 stories overhead.

“Yeah, we put up some turbines, and that changes the way the hilltops look,” he told me. “But we think that will probably be instrumental in allowing us to continue to own our family lands.”

He said ranching has always been tough, but he’s feeling the pinch even more these days, with fewer subsidies and higher property taxes. Unlike some of his neighbors, he has no oil or gas reserves under the ground.

Wind power has been a saving grace. But if you were to fly over Dudley’s ranch, you’d see a line where the wind turbines stop at the end of his property. The wind speed average is up to 12 mph throughout Comanche County. So what makes Dudley’s land better than anybody else’s?

Shannon Ferrell, professor of agricultural economics at Oklahoma State University, breaks it down like this: The power you can derive from the wind is a cube of the wind’s speed.

A little more wind can mean a lot more energy. Just like there are geological maps of all the oil and gas under the ground in Texas, there are now maps of potential wind power.

But there’s another deciding factor for where these turbines are located: contracts. James Decker, a real estate and contract lawyer in the area, said it’s simply easier for a land developer to put turbines on a big stretch of land owned by a few people.

He said landowners with large swathes of land are at a definite advantage. But many of them here still wonder if wind power is really viable. They don’t want a bunch of turbines left on their property if a wind power company goes belly up.