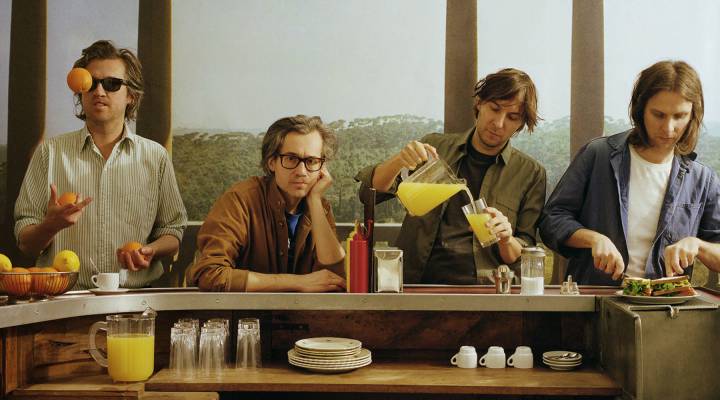 No matter who you are, you’ve probably had a rough day at the office that changed your perspective, or maybe you made an impulse purchase you really, really wish you could take back. This week, Thomas Mars and Laurent Brancowitz from the French band Phoenix took our money-inspired personality questionnaire. Their latest album, “Ti Amo,” is out in June.

Laurent  Brancowitz: Oysters. Money for oysters. And in the oyster, you can find a pearl. So, it’s a cycle. An endless cycle of money and food.

Brancowitz: In your next life, what would your career be?

Mars: I read an interview of a friend of ours, and he said that the most mysterious job there is, for him, was to be a referee. A sports referee. Because I’m curious and a little masochistic, I’ll try it. It’ll be a different life. Maybe a hockey referee, because that seems like the toughest.

Brancowitz: Would you be honest or be corrupt?

Brancowitz: Where would you hide the money?

Mars: I would hide my money old-school style, in my mattress.

Brancowitz: What is something you bought that you now regret buying?

Mars: It’s kind of cheating, but it’s something I was given that I would have bought. It’s a book called “The Rock N Roll Survivor’s Guide.” It’s a really cool book, but because it’s sort of a coffee table book, it’s on my bedside table, and it’s just a source of anxiety for me. It’s all about how to keep your vocal cords not damaged. I’d rather be in denial.

Mars: What was your first job?

Brancowitz: [I worked] in a hotel. I would go to every room and tune the channels. It was an old-school TV set, so [the sets had] very little knobs. Because I was a young guy, I could do it, you know, I could reach.

Mars: [With] your tiny hands.

Brancowitz: What is something everyone should own no matter the cost? Excluding human beings.

Mars: A piece of art. When you buy a piece of art, you don’t realize how much emotional bond you create with it. When you move, that’s what you take with you. I remember my parents having art on the walls and just looking at it, just thinking, “That’s weird.” But now when I see it, [when] I go back to the house I see it [and] to me it’s my childhood.

Mars: What advice do you wish someone gave you before you got into this [career]?

Brancowitz: It took us a bit of time to realize that people absolutely have no idea what they are doing. So if someone would’ve told me that, we would have saved some time trying to work with people who are supposed to be professionals. But in the end, they’re just there. You should do your own thing. No one knows better than you, even if you’re 16 years old.

Mars: There’s a good Ed Ruscha quote that I wish I would have seen earlier in life that says that good art should elicit the response of “Huh, wow,” as opposed to “Wow, huh?” I wish I would have known that before. That’s like when you are a teenager, you’re ready to do anything to wow people really quickly, and you shouldn’t lose your spirit and soul and depth.

Mars: For the wow effect.