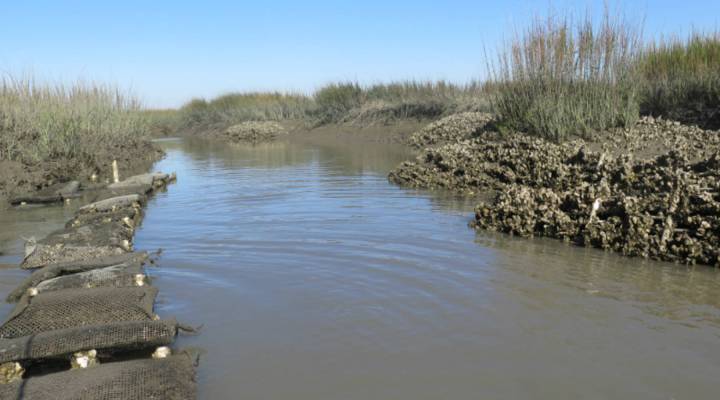 COPY
Farmed oysters from a hatchery grow in bags on the left, just across from wild oysters, growing in clumps on the right. Molly Samuel/WABE

Farmed oysters from a hatchery grow in bags on the left, just across from wild oysters, growing in clumps on the right. Molly Samuel/WABE
Listen Now

Oysters already grow wild on Georgia’s coast, but they’re not those big, individual ones that restaurants usually serve. They grow in clusters, with lots of them stuck together. Great for throwing over a fire at an oyster roast, but not what people expect at a nice restaurant.

“The locals love them, they know how to deal with them,” Joe Maley said, who harvests oysters on the coast south of Savannah. “But get too far up the road and people go, ‘What’s that?’”

Maley, who’s president of the Georgia Shellfish Growers Association, said he’d like to see Georgia oysters compete in restaurants with those from other states. Right now, they don’t.

So the University of Georgia has opened the state’s first oyster hatchery, which can grow the kinds of oysters that restaurants want.

In the hatchery, Thomas Bliss, director of UGA’s Shellfish Research Lab on Skidaway Island, pulled a big, round tub out of a tank full of sea water. When the water drained out of a screen on the bottom, we could see what looked like grains of sand. They were actually thousands of baby oysters, called spat.

Each of these tubs in UGA’s Shellfish Research Lab holds up to 100,000 baby oysters called spat.

“They’re about 1 to 2 millimeters in size right now,” Bliss said. “We estimate we have probably about [50,000] to 100,000 oysters in this one.” There were five of the tubs, adding up to potentially half a million spat growing in the lab.

Bliss said after these oysters get a little bigger, UGA will give them to growers for free to set out in the estuaries until they’re big enough to harvest. Instead of clustering up, as they would in the wild, the hatchery oysters should grow into big, individual, thick-shelled oysters.

Grower John Pelli took me out on his skiff to see his laboratory oysters out in the wild. They were in a big net bag. “They don’t look too bad,” Pelli said, shaking them around.

John Pelli says he wants to continue working out the kinks growing farmed oysters — before offering them to customers.

But not all of them have made it. He’s still trying to work out the best conditions to grow the perfect oyster for eating on the half shell. But he said he’s game to keep trying.

So, maybe, eventually, along with Hog Island Oysters and Kumamotos, menus will feature Skidaway River oysters, from right here in Georgia. 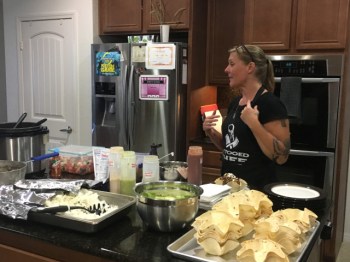