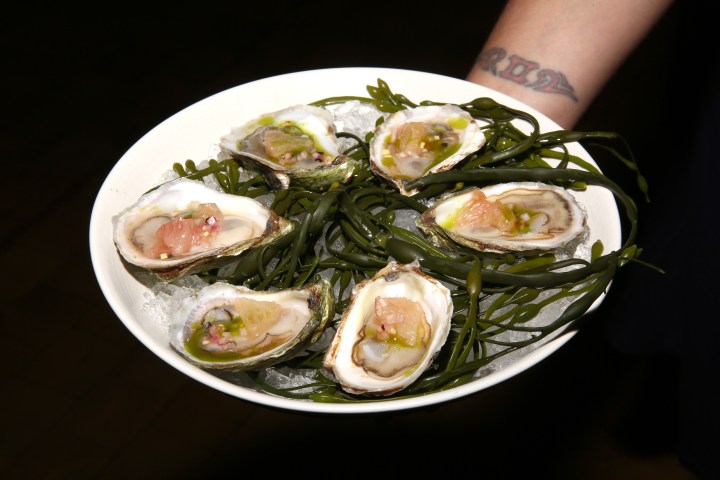 Come in for cheap oysters, and perhaps you’ll buy a few drinks. Or maybe you’ll stay until dinner and order a few entrees at full price.

It’s a strategy that’s been replicated across New York City, along with the country as a whole — especially in coastal cities, with easy access to oyster farms.

And it’s worked. Crave Fishbar, a seafood restaurant with two locations in Manhattan, shucks roughly 20,000 oysters a week — 6,000 of them during happy hour alone. The restaurant typically charges $3 to $4 for oysters during normal hours, and it offers a selection of them for a dollar or $1.50 during its happy hour.

“We came here specifically for the oysters,” said Diana Purcell, who’s sitting at the restaurant’s bar and thinking about ordering a third dozen with a friend. “And I really wanted a martini, and martinis and oysters are best friends.”

Not everyone’s thrilled with that popularity. Oyster enthusiast Julie Qiu runs an blog called In a Half Shell, which focuses on oyster education. On one hand, Qiu says the growth in oyster happy hours gave people access to a delicacy that used to be pretty pricey. On the other hand, people have come to expect that oysters should be cheap — and that all oysters taste like the oysters they eat during happy hours.

Depending on the restaurant, Qiu said, restaurants often buy cheap oysters that they sell during happy hour. Worse, improperly trained staff might store them at the wrong temperature.

“You see oysters that look like just dried up pieces of snot,” Qiu said. “I’ve seen it happen where the oyster is not alive. It’s just a dead, sad little thing in a shell and it still gets served.”

“It’s incredibly labor intensive, because you have to handle cages all the time. You’re sorting the oysters by size, you’re getting rid of other animals that set on the cages,” Malinowski said. “It’s anywhere from 18 months to four years to go from a two-millimeter oyster to a market-sized oyster.

There is one upside to the ubiquity of oyster happy hours. Malinowski runs the Billion Oyster Project, which works with restaurants around New York City to harvest used oyster shells — many from happy hours — and use them to grow new oysters in New York Harbor.

Malinowski said the project collects roughly 8,000 pounds of shell per week, a number that varies seasonally.

The New York harbor oysters aren’t for eating. Oysters filter water, and the goal is that if the project eventually grows a billion oysters in the harbor, the harbor could filter itself every three days.