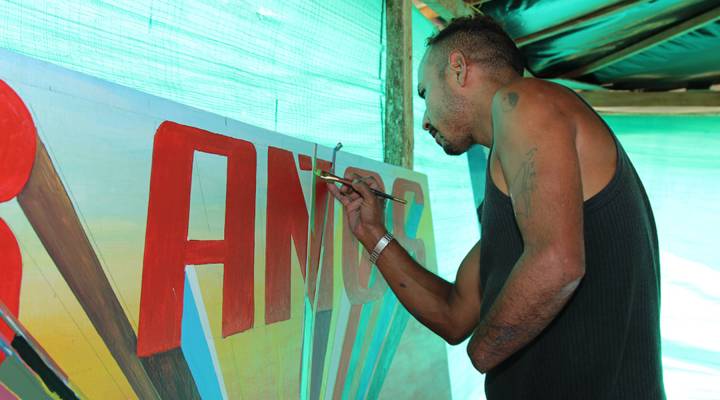 COPY
This guerrilla lost his arm during the conflict in Colombia. He is painting an image that marks 53 years since the formation of the FARC, the Spanish acronym for the Revolutionary Armed Forces of Colombia. Lorne Matalon

This guerrilla lost his arm during the conflict in Colombia. He is painting an image that marks 53 years since the formation of the FARC, the Spanish acronym for the Revolutionary Armed Forces of Colombia. Lorne Matalon
Listen Now

Driving through the hills of Meta, where the Colombian Andes cascade down into lush green valleys, it is hard to imagine the bloodshed that once unfolded here. Meta was ravaged by a war that pitted Colombia’s army and private militia against leftist guerrillas known as the FARC — the Revolutionary Armed Forces of Colombia. The FARC began as a rebellion against economic inequality in the 1960s. It then entered the cocaine trade to finance the conflict, and sowed terror in rural Colombia, killing civilians and extorting businesses.

Now, the FARC and the government have signed a peace agreement. But making peace after five decades of armed conflict in Colombia is a process fraught with challenges. Last year, as part of the peace accord actively supported by the U.S., the FARC agreed to retreat to 26 remote camps.

“The U.S. should help us with peace because they actively participated in this war,” said Aldinever Morantes in Spanish, referring to U.S. aid to the Colombian military during the conflict. He is the FARC commander in one camp in Meta.

Morantes and more than 500 other guerrillas at this camp are pleading for more protection. They stopped roaming this section of the Colombian countryside in February. The rebels put down their weapons and moved to this camp, where makeshift is the operative word. The FARC live in tents with plastic sheeting. So far, they haven’t seen the social services, like clinics, promised in return for demobilizing.

Colombian President Juan Manuel Santos is scheduled to talk with President Donald Trump on Thursday in Washington, D.C., about protecting Colombia’s nascent peace process. After supporting the Colombian military for years, the U.S. is now helping to finance peace after a deal to end the conflict was signed in November. The U.S. Congress approved a $450 million package in May to help Colombia craft a durable peace.

Commander Aldinever Morantes at the FARC encampment near Meta. Though he fought the U.S.-backed military, Morantes wants the U.S. to play an active role in building peace in Colombia.

He said he believed the U.S. will help fortify the Colombian peace plan because it is in the U.S.’s economic interest. Homeland Security Secretary John Kelly recently told Colombia’s El Tiempo newspaper that peace in Colombia will not only benefit Colombia but the region as a whole, along with the U.S. But Morantes said that while peace is progressing well, the situation is fragile.

The stakes are high for the U.S. politically and economically. The two countries have a free trade deal and American companies like Coca-Cola and Exxon Mobil are major players in Colombia.

Latin America security analyst Adam Isacson at the Washington Office on Latin America has said that the FARC has one of the worst human rights records within Latin American leftist movements. The FARC is still on the U.S. State Department’s list of foreign terrorist organizations.

Guerrillas planted landmines during the armed conflict. Today, demining supported by the European Union and Canada is underway in this part of the Colombian countryside.

“Colombians aren’t seeing the security that peace was supposed to usher in,” Morantes, the FARC commander, explained. This year alone, 27 human rights activists and indigenous leaders have been murdered. He said the guerrillas are worried they will also be targeted. “We have our fears right now,” he said as rain fell onto the roof of his tent.

In Meta, and other large parts of Colombia, the retreat of the FARC has created a vacuum that has attracted criminal gangs, narco-traffickers and hired guns working for wealthy landowners. Now, Morantes said, the army and police, forces he once fought, are his only protection from those threats.

Jorge Ivan Sanchez, a lawyer who works for the Colombian Office of the High Commissioner for Peace in Meta, calls to tell guerrillas that he will be walking into their camp.

Colombia traded justice for peace in cutting the deal with the FARC. With few exceptions, FARC members will be spared prison time and they’ll be able to run for political office. Colombia’s right wing opposes immunity for the FARC. The right is led politically by former Colombian President Alvaro Uribe.

For rural Colombians in Meta like 33-year-old Yeisson Pereira, words like that are an echo of his youth, when the pendulum of power swung between the FARC, the army and right-wing paramilitaries.

“The government, private militias and the guerrillas, they’re all practically the same,” he said.

Colombian soldiers at a checkpoint in the mountains of Meta. The army battled the guerrillas here, but today, guerrillas are asking for a greater military presence to protect the region from organized crime and private militias.

Jorge Restrepo acknowledges that concern. But he said the tide has turned away from mass conflict.

“We’re not going to get back to war. We’re not going back to having a narco-trafficking guerrilla group,” said Restrepo, who studies the economics of conflict at CERAC, a Colombian think tank.

Restrepo said pockets of intense insecurity remain. But he pointed out statistics showing a large overall reduction in violence, and that Colombia is far safer today than ever before. He said U.S. military assistance used by Colombia to contain the FARC only went so far.

“We were not being able to produce the security that we are enjoying now through military means,” he said.

In Meta, people said peace building is still a work in progress.

Jorge Ivan Sanchez grew up fearing whichever group held sway here. Today, he’s a lawyer who works for the Colombian Office of the High Commissioner for Peace, an arm of the Colombian presidency.

“It is a challenge, but I’m contributing my little bit to this process,” he said, adding that the peace process should help revive one of Latin America’s largest economies that has been blunted by generations of war.