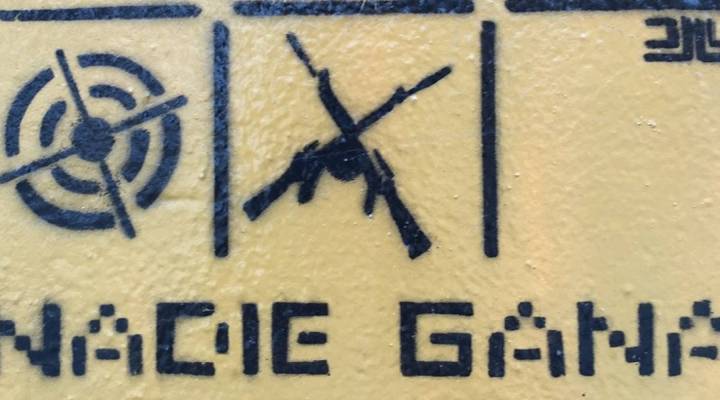 COPY
A stencil image on a wall shows a tic-tac-toe board with the caption that reads, "No One Wins" in armed conflict. Lorne Matalon

A stencil image on a wall shows a tic-tac-toe board with the caption that reads, "No One Wins" in armed conflict. Lorne Matalon
Listen Now

The Colombian state and the guerrilla movement known as FARC, the Spanish acronym for the Revolutionary Armed Forces of Colombia,  are scheduled to sign a peace accord Monday (September 26).

Colombia and the U.S. have a lot at stake in this accord not only politically, but also economically. The two nations have a free trade agreement. U.S. companies like  ExxonMobil and Coca-Cola are players in the Colombian economy. In 2015, Colombia was the 20th largest market for U.S. exports; agricultural equipment, auto parts, fertilizers and wood among them. Peace in theory could expand that trade.

“It’s totally dependent on political stability and lack of violence in Colombia which remains to be seen,” said Michael Nacht,  a former U.S. assistant secretary of defense. He is  currently at the Goldman School of Public Policy at the University of California at Berkeley. If Colombia is stable for the next three to six months, Nacht said,  its challenged economy should improve as Colombia diverts money from armed conflict to development. “Then you’ll see the business community really re-engage in Colombia,” he said, though it’s unclear if hope for a better economy will prevail over  widespread disdain for the FARC.

FARC is the largest guerrilla movement among several that have fought for decades to topple the Colombian government. It began as a rebellion against social inequality before drifting into organized crime, principally drug trafficking and extortion.

The United States has spent billions of dollars in Colombia backing successive administrations against the FARC and another guerrilla group known as the ELN, the Spanish acronym for the National Liberation Army, under the terms of Plan Colombia.

President Barack Obama welcomed his Colombian counterpart Juan Manuel Santos in early February to discuss the peace proposals. Mr. Obama pledged  $450 million in assistance for a U.S. initiative called “Peace Colombia,” which has a clearly different tone and context than “Plan Colombia,”  a multibillion dollar U.S. effort to bolster security. However it is unclear if Congress will approve the funding before Obama’s term ends.

There’s still disagreement over the tactics and strategy deployed by the government of Colombia in negotiating with the FARC. Many Colombians are angry that FARC and its leaders will avoid prison. FARC has has been on the U.S. State Dept’s Foreign Terror Organizations list since 1997.

“It’s a situation of being scared,” said Dario Hidalgo, a Bogotá-based urban sustainability researcher.  He was referring to the inability to move freely throughout Colombia during the conflict, which formally dates back to the early 1960s. But the forces that set the stage for that conflict go back to at least the 1940’s.  Hidalgo came to the Colombian Senate to watch  lawmakers approve the terms of a referendum on the peace accord, that is scheduled for October 2, 2016.

Hidalgo talked about why he came.  “Suddenly you hear that some soldiers are killed, that some policemen are killed. This is every day’s news, or was,” Hidalgo told me.

Hidalgo said his cousin was murdered by the FARC, but in spite of that, he supports the peace process.  “We won’t have immediate peace” Hidalgo said. “There will be criminals,” he continued. “There’s still narcotics. But knowing that there’s no guerrillas is a really big improvement.”

Colombia and the FARC negotiated the peace agreement in Havana, Cuba.

The  real test of Colombia’s accord with the FARC comes October 2. Colombians will be asked if they approve or reject the accord.  The result of the referendum is binding. If the Colombian people vote “No,” then  President Santos cannot implement this accord.

“Nobody today in Colombia knows how to live and do politics without the FARC in the picture,”said  Senator Claudia Lopez, in  Bogotá. She supports the peace process, though she’s no fan of the FARC. “This society for good reason hates the FARC,” Lopez said. “And we fear them.”

She is hardly an apologist for the Colombian government either. Lopez fled Colombia for a year after she exposed links between Colombian right-wing politicians and paramilitary death squads. But in 2014, she returned and won her senate seat with the slogan, “Colombia Must Be Respected.” She condemns atrocities on both sides.

“ If we do a peace process, you’re not going to be able to use violence, neither the FARC nor the state,” she said.

Outside the Colombian Senate, on a Bogotá street, a band was singing about the pain and suffering Colombians have long endured. Colombia’s right-wing politicians say neither will end if as proposed, guerrillas are permitted to run for political office.

Álvaro Uribe is  Colombia’s former  president. Now he’s a senator who is one of the country’s most prominent voices against the peace talks.  While he says he supports peace, he objects to the reintegration of guerrillas into the government.  He argues that in essence, they’d be granted immunity despite documented human rights abuses.

“If those responsible for atrocities do not go to jail, this process will be a midwife of more violence,” Uribe said in an interview, as the Colombian Senate  debated whether or not the Colombian people should be allowed to weigh in with a national referendum.

But Senator Lopez said it’s time for a change.“We need to imagine what it’s like to take the risk to stop that conflict and to take the conflicts and challenges that are still going to remain.”

Dario Hidalgo agreed. “That’s what is so important, that this peace agreement is signed, even if we have to accept hard things, hard things to swallow,”  he said.