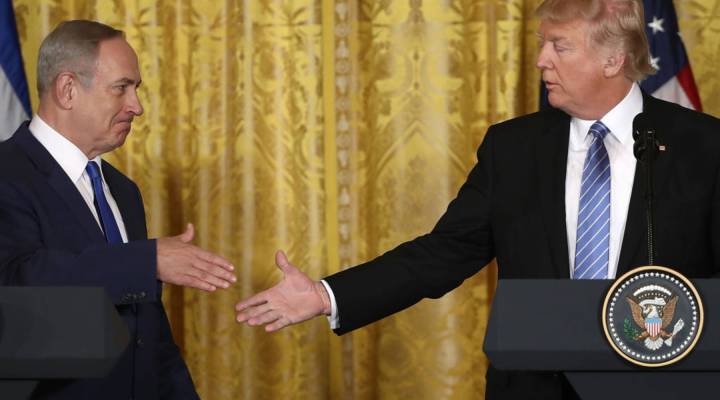 President Trump leaves Friday for his first overseas trip since taking office. He’ll visit Saudi Arabia, Israel and then attend a G7 summit in Italy. The president’s diplomatic dealmaking will get its first real test as he meets with Israeli Prime Minister Benjamin Netanyahu and Palestinian President Mahmoud Abbas. David Horovitz, editor of The Times of Israel, talked with Marketplace host Kai Ryssdal from Jerusalem. The following is an edited transcript of their conversation.

Kai Ryssdal: The Middle East is a place that requires some subtlety. Mr. Trump is not a subtle man, as we’ve learned. What’s the mood over there as he gets ready for this trip?

David Horovitz: Well, first thing to say is that his predecessor was certainly subtle and certainly committed to trying to make progress, but he didn’t get anywhere. So, the fact of non-subtlety, I don’t think by definition means that you’re doomed. In the few weeks that Trump has been in office, you know, he sent an envoy here who did a very good job. His name is Jason Greenblatt. He met with Israelis, met with Palestinians. The Saudis are making some slightly encouraging noises. Trump thinks that he can do a deal. I don’t think he can, but I would be only too happy if he could prove all of us doubters wrong.

Ryssdal: Is there a way that Mr. Trump’s prowess in business, as you mentioned — his ability to do a deal — could help things along? He’s stopping in Saudi Arabia first, as you know, and then coming to Jerusalem. Could he perhaps, do what he does?

Horovitz: Look, the reality is that the sides are a long way apart. It’s a difficult deal at any time. And right now it’s extremely hard to see that he can make progress. At the moment, the Palestinian leadership has a public that resists compromise. You’ve got an Israel that would like a deal if you could guarantee that it would hold into the long term. And like I say, that’s very difficult.

Horovitz: Netanyahu’s line in the last year or so, that’s the Israeli prime minister, has been exactly that. He’s sort of sounded this belief that the region can chivy the Palestinians for good. So, Netanyahu would like to believe that yes, the Saudis can be part of a wider quilt, if you like, patchwork of relationships. And then in a climate of greater regional cooperation, they’ll be encouragement for the Palestinians to compromise and maybe even pressure from the Arab world for the Palestinians to compromise. I’m not sure that that’s extremely viable. But again, make a comparison with the last president. Barack Obama tried to get the Saudis to at least allow something like symbolic overflights by Israeli civilian airliners. Let them come into your airspace to save them time when they’re traveling around the world. The Saudis wouldn’t even go along with that. So maybe Trump will have a little bit more success.

Ryssdal: Since I have you on the phone, one last thing: What is the reaction over there to the news from Washington last night, East Coast time, about the revelations Mr. Trump made in the Oval Office to the Russians?

Horovitz: Well, it’s a very interesting series of articles and reports from the Israeli perspective, because Israeli-American intelligence cooperation is very close. There’s very detailed exchange of information. It’s one of the key aspects of this very import relationship. There’s military cooperation, there’s all sorts of shared values and shared interests, there’s a great deal of intelligence exchange. So, we don’t know the specifics of the story. We don’t know what to believe and what not to believe. But you can be sure that the Israeli officials who are engaged in that aspect and involved in that aspect of the relationship with the United States are watching these reports very carefully.