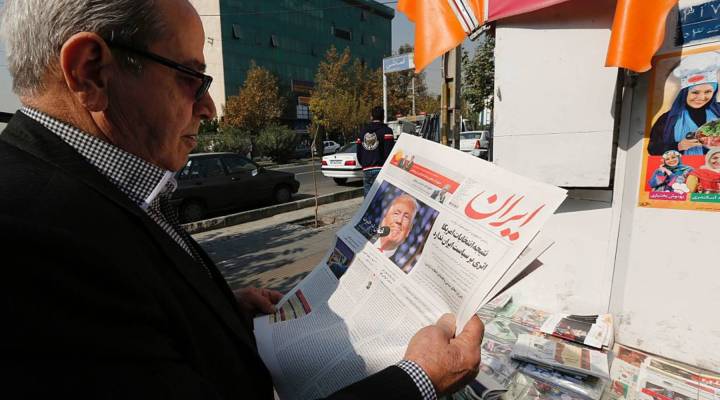 COPY
An Iranian man holds a local newspaper displaying a portrait of Donald Trump a day after his election as the new US president, in the capital Tehran, on November 10, 2016.    ATTA KENARE/AFP/Getty Images

An Iranian man holds a local newspaper displaying a portrait of Donald Trump a day after his election as the new US president, in the capital Tehran, on November 10, 2016.    ATTA KENARE/AFP/Getty Images
Listen Now

One of the things that happens with news is that, often, stories play differently here than they do overseas.

With that in mind, Marketplace Host Kai Ryssdal spoke with Borzou Daragahi, the Middle East correspondent for BuzzFeed News who is based in Istanbul, Turkey, to get a sense of the economic implications of the White House travel ban, as seen from abroad. Below is edited transcript of their conversation.

Kai Ryssdal: Give me the big picture first, would you, and some sense of how this ban looks from overseas.

Borzou Daragahi: Well I think that, for a large part, many people in the Middle East and the broader Muslim world, based on my reporting and reading of the local press in these countries, they see it as kind of a discrimination against them, as discriminatory and example of the what they would consider the rising Islamophobia in the West. So, it’s definitely perceived that way.

Daragahi: I hear that a lot and I’ve been hearing that for a few years now and that’s going to intensify right now as a matter of fact. I was looking at reports in U.S. news outlets, as well as other news outlets, about India, China, Malaysia, Indonesia — institutions in these countries including schools, tour operators and investors. Chambers of commerce seeing this as an opportunity, it’s like, “Hey, if you’re a rich dude or a lady and you want to invest, if you’re a promising student you want to study, if you’re looking for a vacation, don’t go to the U.S., forget them. Come visit us, come here and spend your money here.” So, already people are exploiting this, people that we should consider U.S. economic rivals are exploiting the visa ban to make bank.

Ryssdal: When you go out for a cup of coffee or whatever on the corner there in Istanbul, is this a topic of conversation?

Daragahi: Oh absolutely. Trump and his policies and his administration are front and center here. Itt’s constantly on the television. People are talking about it. It’s in the front pages of newspapers, and officials in Turkey were rather welcoming to the Trump administration — rather disillusioned by the administration of Barack Obama — even they, in the last few days, have begun to speak out. Prominent voices in the government condemning the visa ban, seeing it as message to the broader Muslim world, including the Turks, which are also an essential ally in the fight against ISIS, a NATO partner, and you know the host of a massive U.S. airbase that is crucial to U.S. operations in this part of the world.