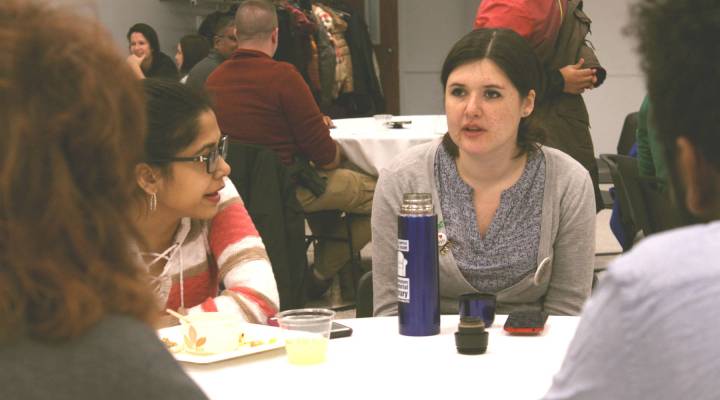 Indiana State University in Terre Haute is typically pretty deserted during spring break. But on a cold afternoon earlier this month, several dozen international students gathered for lunch in the student union.

“I feel for you, and the fact that you’re here at Indiana State University and not in a warmer climate,” Chris McGrew told the students as they dined on Thai noodle salad and apricot glazed turkey breast.

McGrew directs the Center for Global Engagement, which oversees the university’s international programs. His office, along with staff from student affairs and public safety and admissions, hosted this lunch to answer students’ questions and make them feel welcome.

“It was designed to be just a conversation to send the message that, ‘hey we’re thinking about you, we care about what’s going on, so how you doing?’ kind of thing,” McGrew said.

About one million international students are enrolled in U.S. colleges, according to the Institute for International Education. But with so much uncertainty about the Trump Administration’s travel and immigration policies, colleges are reporting a drop in applications from other countries. Some schools are taking steps to reassure students who are already here by rolling out the welcome mat, even when they’re closed.

“We don’t want a student to be caught up in something at the border and not be able to return and finish classes,” said McGrew.

Mustafa Mustafa, 21, is a junior studying marketing. He comes from one of the six predominantly Muslim countries affected by the Trump Administration’s latest travel ban. For his own protection, he didn’t want to say which one. Some of his fellow students support the ban, he said, and he hasn’t always felt welcome on campus.

“The jokes of ‘you are getting deported’ start popping up more and more,” he said. “They are usually followed with ‘oh, I’m just joking,’ but I feel like to all jokes there is a hint of truth in them.” he said.

Mustafa no longer plans to return home this summer, for fear of not being able to come back. He also worries his family won’t be able to come see him graduate next year.

“They had helped me throughout my whole degree and my whole time here, and them not being here to see the end result and to see me walk across the stage was the most hurtful and scariest part of it all,” he said.

Other colleges have set up hotlines and special counseling sessions or offered legal help, said Peggy Blumenthal with the Institute for International Education. Colleges rely on those students not just for diversity, but for the full tuition they often bring. Schools have also taken the marketing to Twitter with the hashtag #youarewelcomehere.

“They’re also working with faculty and domestic students to make sure that they kind of go out of their way to make these students feel comfortable,” Blumenthal said. “I think actually every single campus is doing something.”