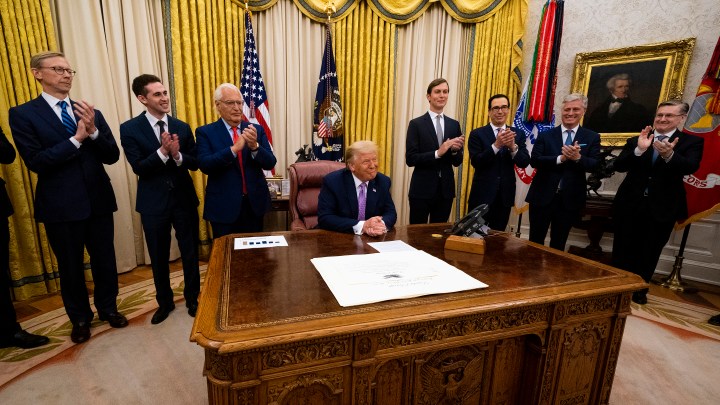 COPY
The U.S.-brokered deal could lead to an increase in trade and travel for both Israel and the UAE, says Sanam Vakil at Chatham House. Doug Mills-Pool/Getty Images

The U.S.-brokered deal could lead to an increase in trade and travel for both Israel and the UAE, says Sanam Vakil at Chatham House. Doug Mills-Pool/Getty Images
Listen Now

A U.S.-brokered deal to normalize ties between Israel and the United Arab Emirates has drawn ire, praise and a potential economic boost. This morning, Iran denounced the Middle East deal, calling it dangerous and “stupid,” while Palestine withdrew its UAE ambassador and Turkey condemned what it calls “hypocritical behavior.”

But there’s also been a broad international welcome for the pact, which has seen Israel agree to suspend annexation plans for the occupied West Bank. As the process of formally normalizing relations between Israel and the UAE continue in the coming weeks, the two sides could see a swift economic boost from a pickup in trade and travel. That’s according to Sanam Vakil, the deputy director of the Middle East and North Africa Program at Chatham House.

Sanam Vakil: There are a lot of opportunities for investment and technology, tourism, trade. This relationship has been brewing behind the scenes for a number of years now, and sort of coming out allows for both countries to reap the economic gains rather than just solely, quietly benefiting from the security and intelligence ones.

Victoria Craig: This deal is expected to be formally signed next week, but how long will it take to actually begin ramping up trade between the two countries, encouraging tourism and investment, and how does all that work in practicality?

Vakil: It’s hard to say how much behind-the-scenes work has already been done, if they’ve already highlighted and managed to target areas where there could be immediate benefits. You might see some trade deals be announced alongside the signing. But I suspect, in the coming weeks and months afterwards, there will be more announcements of cooperation flights, perhaps going back and forth. And, I think tourism is where we’re going to see the initial boost in trade ties because there’ll be a lot of Emiratis that will be looking forward to going to Jerusalem, praying at Al-Aqsa Mosque.

Craig: Is this something that we’re talking about years in the making? Or could we see a really big pickup in the next few months, really?

Vakil: It’s a matter of if Israeli technology companies can find synergies and areas to cooperate with normalization, sort of suggests that the UAE is a country that likes to be ahead of the curve in the region and put itself forward as a more forward-looking, progressive Arab state.

Craig: Many world leaders have praised this deal, and President Trump says he expects other countries will agree to similar deals with Israel. But this move has infuriated Iran and Palestine. Even Turkey came out in support of Palestine this morning. Is there a risk that this deal falls apart? Or do you see other countries in the region following suit?

Vakil: I don’t think this deal will fall apart. The question is, how close will the UAE and Israel get? And there have been some caveats where Netanyahu has said he’s not pursuing annexation, for now. So these sort of caveats could rupture the relationship. And it’s sort of important to watch out for how these potential spoiler events could impact normalization and the swiftness of normalization.

I think it’s hard to predict how other countries are going to follow suit. There are a number of Gulf countries that already have had this sort of warming relationship with Israel, including Bahrain, and including Saudi Arabia. I find it hard to see King Salman, the Saudi King, follow suit, particularly because the Saudis have a religious role in the Arab world and in the Muslim world that they have to sort of protect. There is, of course, opposition to this move within the Arab world and among Muslims, because they feel that the rights of the Palestinians are being, again, overlooked. But we might see a country like Bahrain follow suit because it doesn’t have as much to lose.

Craig: And if that happens, this does have huge economic consequences or benefits for the region.

Vakil: Absolutely. The more regional trade that we could see, of course, that’s positive for a country like Bahrain, that has diminishing energy potential and is largely dependent on the support of Saudi Arabia, and to a lesser degree, the UAE, needs foreign direct investment. And increase in trade and tourism would no doubt benefit the Bahraini economy.