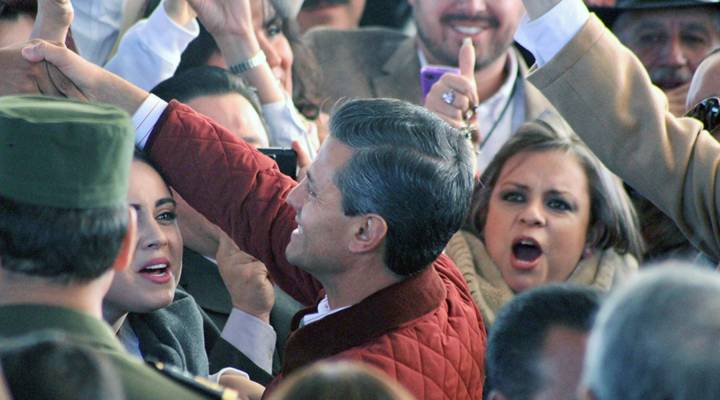 Mexico will elect a new president next year. And although President Trump has now at least temporarily delayed withdrawing the United States from the North American Free Trade Agreement, continued uncertainty over the trade deal and Trump’s plans for a border wall are roiling Mexican politics.

Former Mexico City Mayor Andrés Manuel López Obrador is one of several people who have either declared their candidacy or expressed interest. Others include Margarita Zavala, wife of former president Felipe Calderón and Miguel Ángel Mancera, Mexico City’s current mayor. President Enrique Peña Nieto’s six-year term ends next year. The constitution bars him from seeking re-election. Mexico’s political parties must nominate presidential candidates by March 2018 for the a vote that will take place the following July. The jockeying has already started.

Trump’s election has triggered a rise in Mexican nationalism. Andrés Manuel Lopez Obrador, a populist Mexican leftist who wants to reduce economic dependence on the United States, is channeling that nationalism. Though defeated in Mexico’s last two elections, López Obrador is leading in numerous polls as Mexico’s next presidential cycle approaches. He’s riding revulsion over Trump’s anti-Mexico rhetoric. López Obrador told Univision television journalist León Krauze that Mexico should not accept American military assistance currently provided each year under terms of the Mérida Initiative. The U.S. has delivered about $1 billion of military and police assistance to Mexico since 2008.

“I never dreamed in my lifetime of a U.S. president that would be afraid of Mexico, afraid of competition,” said Juan Carlos Romero Hicks, a member of the Mexican Senate’s Foreign Relations Committee. He said Trump has given the left a political gift. Since Trump’s victory, Romero Hicks has continued to promote an integrated North American economy. But he said that has not been an easy task since the American election.

“In the U.S., there’s a notion that is not correct that Mexicans are taking jobs from Americans, that we are a security threat. Building a wall is absurd,” he said.

López Obrador is leveraging that feeling. He opposes the 2014 opening of Mexico’s oil and gas markets to foreign investors, many in the U.S. — names like Exxon Mobil and Chevron that have already moved in. He wants to import less U.S. corn and gasoline. He believes Mexico should stand up for itself. There is a blueprint of sorts. In 2009, Mexico placed tariffs on certain goods from Oregon and California during a trade dispute. The tariffs were only lifted when the U.S. stopped blocking Mexican trucks from gaining full access to U.S. highways.

Victor Hugo Michel is the chief editor of El Financiero television, a channel focused on the economy.

“Donald Trump has permeated the Mexican political discourse,” he said.

Mexico’s presidential candidate Andrés Manuel López Obrador says the notion that “Mexicans are taking jobs from Americans, that we are a security threat” is incorrect and that “building a wall is absurd.”

“Andrés Manuel López Obrador, he has positioned himself as the only candidate that would know how to react to Donald Trump,” Michel explained. “And this is having a success because most Mexican voters want to see retaliation.”

“For too long, Mexicans have coddled that illusion that if things were bad enough, they could always go north for a new opportunity. And so if you put up the wall, well, there’s no better symbol that tells you, ‘Nope, you’re stuck,’ ” he said.

Though López Obrador is a leftist, he and Trump do have something in common. Both want change on the border. Trump wants it effectively sealed, while López Obrador wants the U.S. to reform immigration so that Mexicans can cross the border to work temporarily but legally.