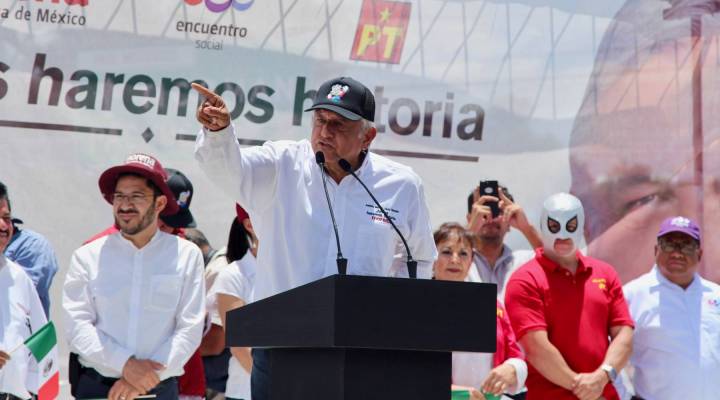 Antonio Godinez Vera makes his living turning golden kernels of Mexican corn into a mash that becomes tortillas. People like Godinez, a small business owner with four employees, are part of a wave that could power Andrés Manuel López Obrador to the Mexican presidency when voters elect a new head of state on July 1.

The campaign is being closely watched by U.S. energy companies that have operated in Mexico since the country’s 2014 energy reform. That reform was an opening that allowed foreign energy companies to bid on offshore blocks in the Gulf of Mexico, onshore oil and gas development, wind and solar production and distribution and electricity generation contracts.

At a rally in suburban Mexico City, presidential front-runner López Obrador told the standing-room only crowd of 10,000 plus people that changes in Mexican energy policy haven’t produced lower prices for gasoline and electricity. López Obrador has called for a return to more state regulation of the energy industry, a prospect that could jeopardize billions of dollars in current and projected foreign investment in the sector.

“The country hasn’t gained a thing,” Godinez said as he described what he sees as the current failings of Mexico’s energy reform. Though reformers promised to narrow the gap between energy costs in the U.S. and Mexico, energy data suggest Godinez pays approximately 20 percent more for his electricity than a business does in the United States. The energy reform’s proponents  are confident the benefits will be realized eventually.

In addition to studies showing voter dissatisfaction with the energy reform, high levels of violence and accusations of corruption against the current government mean Godinez will be backing López Obrador “to escape our misery.”

López Obrador has leveraged frustration over the cost of energy to highlight other campaign issues.  López Obrador has stated that all that has grown since the current government assumed power in 2012 is inequality, insecurity and violence.

Violence isn’t just a campaign issue in the Mexican presidential race, it has also plagued the presidential campaign itself. A recent headline read, “11 Politicians Killed In Eight Days.” More than 100 candidates have been murdered since September 2017.

While the violence continues, voters are focused on local issues. In the southern Mexican state of Veracruz, López Obrador’s call to end privatization in the energy sector has hit a nerve. Veracruz is where much of the energy in Mexico is either produced or refined.

Ignacio Quesada is on the board of International Frontier Resources, one of the first foreign energy companies to be awarded a drilling contract after Mexico opened the doors to its energy sector four years ago.

“If they start reviewing everything, we are going to slow down, put more regulation, put more roadblocks. Things will get done but at a much slower pace,” Quesada explained. That’s the wrong direction in terms of simplifying the process.”

The shift ends at a petrochemical plant in Veracruz. One of the energy reform’s goals is an expansion of Mexico’s petrochemical capacity.

Much of the drilling expertise that Mexico said it needed to attract when it introduced its energy reform was perfected in the oil and gas-rich Permian Basin of Texas. Kirk Edwards, CEO of Latigo Petroleum in Odessa, Texas said some American energy companies considering Mexico are now sitting out the current election cycle before they commit millions of dollars on projects that typically take years to realize a return on investment.

“Nobody’s going start doing something like that today without the certainty of what may happen in the future,” Edwards said.

Another element is the role played by President Donald Trump.

“President Trump is a central character in the Mexican election,” explained Tony Payan, who directs the Mexico Center at Rice University in Houston. He said Trump’s anti-Mexico rhetoric has lifted López Obrador ardently nationalist campaign. Payan suggested that U.S. energy companies need be ready if López Obrador wins. “The rules of the game are definitely going to change,” he said.

The Mexican government has said foreign energy companies would ultimately contribute $200 billion to the country’s economy. However López Obrador says so far it is only those businesses, and not the people, who are seeing the benefits of that investment.