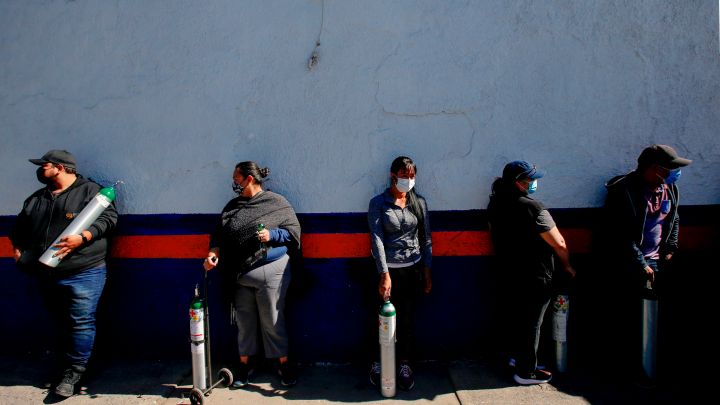 In Mexico, cases of COVID-19 have been surging this year. Thousands need oxygen as a result of the disease, but there are critical shortages in a barely regulated market.

Karla González and her family in Mexico City were infected. Her dad struggled the most.

“He got very, very sick in a very critical state,” González said.

Her dad doesn’t have health insurance, she said, and public hospitals were packed while private ones were unaffordable. So her father stayed home, and González had to find him an oxygen tank.

And as regular providers ran out of them, González said, she had to go on Facebook and buy one from a stranger.

The government says it is trying to tackle unlawful trade in oxygen.

Olga Sánchez Cordero, Mexico’s secretary of the interior, said the government has had reports of fake oxygen equipment in the black market and that authorities have arrested people selling or stealing oxygen tanks.

García said the demand has increased greatly, and with it the prices, going from $600 for a condenser last year to around $1,700 now.

And health officials say there are shortages. Dr. Heberto Arboleya heads operations for a convention center in Mexico City that has been turned into a COVID-19 hospital.

Arboleya said the public health care system has been giving free oxygen and tanks to sick citizens, but there’s a shortage. There are long lines outside hospitals and the offices of other providers, as people wait for tanks and refills.

Mexican President Andrés Manuel López Obrador said his government’s overall COVID-19 strategy is sufficient and that the nation will defeat the health and economic crises under his plans.

Meanwhile, González said her father is still recovering. She said her family spent more than $5,000 for his treatment in just two weeks.