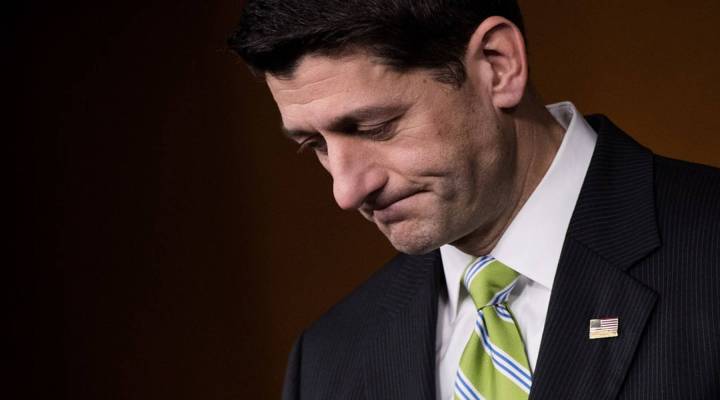 COPY
Speaker of the House Paul Ryan announces a cancelled vote on the American Health Care Act, the GOP plan to repeal and replace the Affordable Care Act, in March. Drew Angerer/Getty Images

The requirement that insurance companies cover people with pre-existing conditions is a popular one. The challenge now is how do you pay for them?

“That is what a lot of the debate is around — individuals who do not have insurance who need it,” said Dan Mendelson, president of Avalere Health.

The basic model of health insurance is pretty simple: The healthy help pay for the sick. So Obamacare’s solution to paying for people with pre-existing conditions was to push more healthy people to buy insurance plans, penalize those who don’t and subsidize some who do. More healthy people paying, more sick people get covered.

Republicans do not want to do that, and their challenge is figuring out an alternative as they work on an Obamacare replacement bill.

“So imagine we’re making a model airplane,” said Craig Garthwaite, who directs the Kellogg School of Management’s health care program at Northwestern University. “They want to make one with one wing and one landing gear, but not think about ‘What does it take to make this health insurance airplane get off the ground?’”

The Republican alternative being considered at this point is to say sure, insurance companies still can’t deny people with pre-existing conditions, but they can charge them more.

“In theory, insurance companies might have to take these people,” said Larry Levitt with the Kaiser Family Foundation. “But you can bet they’re gonna charge them astronomical premiums to keep them out of their pools.”

So the healthy would still pay for the sick. There would just be fewer sick people with insurance.

“That would have the effect of lowering premiums significantly for people who are healthy, but likely pricing people who are sick out of the market,” Levitt said.

That could be a lot of people. Twenty-seven percent of adults have pre-existing conditions that would have resulted in denial of private insurance before Obamacare.