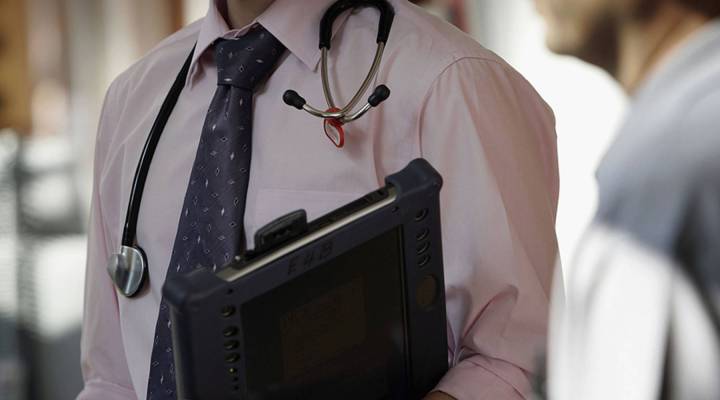 This midterm campaign is breaking multiple records — the amount of money being raised and spent, the diversity of the candidate pool and in the number of political ads blanketing television stations all over the country.

Kantar Media estimates more than $2 billion will be spent on locally broadcast political ads this campaign cycle, plus another $850 million for local cable. All that money is flowing into what the Wesleyan Media Project says is a 60 percent boost in the overall number of ads compared to the 2014 midterms.

Almost half of those ads mention health care, said Erika Franklin Fowler, co-director at the project.

“I do think health care has been in increasing focus,” she said, “both for Democrats, but also you’ve seen the Republican focus increase.”

According to the Wesleyan Media Project’s analysis of Kantar Media/CMAG data, health care appeared in 54.5 percent of pro-Democratic ads for federal races between Sept. 18 and Oct. 15 and in 31.5 percent of pro-Republican ads.

Fowler said Republicans have started paying more attention to health care as the election gets closer in response to attacks from Democrats that Republicans would eliminate the protections for people with pre-existing conditions that were included in the Affordable Care Act. Several Republican candidates are now running ads specifically saying they support protections (even if not through the ACA), and President Donald Trump has even weighed in on the issue several times.

This pivot in messaging comes the same week the Trump administration issued new guidance that could allow states to side-step rules on pre-existing conditions. And that’s on top of a GOP-backed lawsuit that is attempting to overturn what’s left of the ACA, rules and all.

Republicans will totally protect people with Pre-Existing Conditions, Democrats will not! Vote Republican.

“At the same time that they’re messaging that they’re going to protect pre-existing conditions,” said University of Pennsylvania law professor Allison Hoffman, “Republican governors and attorney generals are fighting against the ACA in a way that would eliminate them.”

But there’s a good reason for Republicans to focus on the issue along with Democrats. According to a Morning Consult/ Politico survey, “83 percent of Democrats and 80 percent of Republicans say that insurance companies should not have the legal right to deny coverage for people who have pre-existing conditions.”

That includes 54-year-old Sharon Lyons, a Democrat in Oklahoma City, Oklahoma. She’s been battling stage 4 lung cancer for years and has good insurance. But said she worries about family, friends and fellow patients who might face unaffordable insurance if the ACA rules were undone.

Many of the Republicans running ads saying they support the protections argue that the benefit can be delivered outside of the Affordable Care Act. But Joseph Antos at the conservative American Enterprise Institute said that could be difficult.

“The Republicans who are running on this issue need to have language out there that they … want to help people with pre-existing conditions,” said Antos, “but such pieces of legislation are clearly going nowhere, and will go nowhere.”

But Antos also points out that Democrats haven’t had much luck with legislation on the issue either.

“Democrats tried and failed to get some bill voted on that was going to reinforce the ACA pre-existing condition rules,” he pointed out. “It didn’t get to the floor, it wasn’t voted on, just as these Republican proposals are not getting to the floor, and they’re not being voted on. This is a sideshow.”

Also known as … a political campaign.