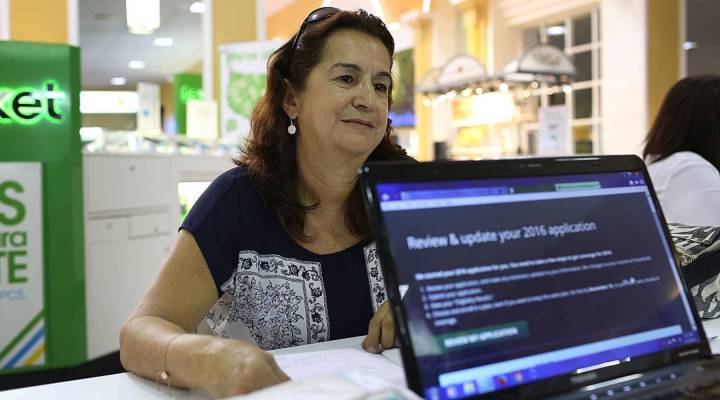 COPY
Martha Lucia sits with an insurance agent from Sunshine Life and Health Advisors as she picks an insurance plan. Joe Raedle/Getty Images

Do people have to be threatened into buying health insurance?

That’s a much more important question now that the Senate Republicans’ tax plans include eliminating the Affordable Care Act’s requirement that people buy insurance or face fines. The move would give senators an estimated $338 billion in savings to help pay for deeper tax cuts.

The question is: What effect would repealing the mandate have on the effectiveness of the ACA overall?

Aviva Aron-Dine, a former top official at Health and Human Services who helped implement Obamacare, said she goes back to “the sort of basic logic of the three-legged stool.”

The first leg, she said, is the requirement that insurers charge people with pre-existing conditions the same price as healthy people. But that makes premiums more expensive, so the second leg is needed — federal subsidies to make coverage cheaper. And to keep those premiums as low as possible, you need loads of healthy consumers. Which is why, said Aron-Dine, the third leg, the mandate, is vital. Without it, “it’s clear coverage for millions is at stake,” she said.

Many health policy people believe the mandate meets the common sense test: If money is tight, and there’s no requirement, why would anyone get coverage?

But some conservatives, like the Manhattan Institute’s Chris Pope, argue the ACA’s success is not about the stick. It’s all about the carrots.

The nonpartisan Congressional Budget Office has estimated 13 million more Americans would end up uninsured without the mandate. But that number may soon change. Just last week, CBO economists also wrote “repealing the mandate is not the same as never having had the mandate.” In other words, people are getting to like subsidized insurance.

“We have not seen a full-scale cultural shift to a place where it’s just expected that you have health insurance,” said Larry Levitt from the Kaiser Family Foundation. “But we’re certainly closer to that point than we were a few years ago.”

Leavitt agrees the the subsidies and protections for people with pre-existing conditions likely enhance enrollment. But a recent Kaiser survey found that 38 percent of people said the threat of paying the penalty factored into why they bought a plan.

“Losing the individual mandate is kind of like blowing up the bridge behind you and not knowing exactly how you’re going to get back,” Levitt said.

No one knows how many people will go without insurance if the mandate is dropped, but undoubtedly people will. Whatever the precise number, senators must consider whether driving up the uninsured rate is worth the value of deeper tax cuts.