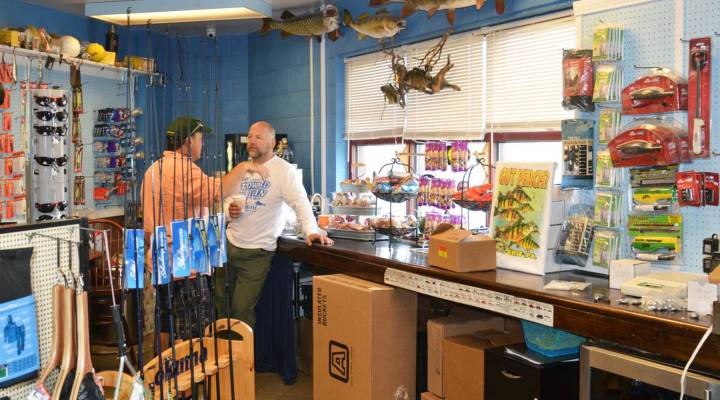 COPY
At Presque Isle Angler Bait and Tackle in Erie, you can get fishing supplies along with a read on the economy. Caitlin Esch
The Big Promise

At Presque Isle Angler Bait and Tackle in Erie, you can get fishing supplies along with a read on the economy. Caitlin Esch
Listen Now

Marketplace has been working on a new series since inauguration day called “The Big Promise.” Based out of Erie, Pennsylvania, it’s a look at how President Trump’s policies and the promises he made are playing in a town where the economy is changing.

We were in Erie yesterday and took a swing by a bait shop called Presque Isle Angler Bait and Tackle. It’s the kind of place where you can get your supplies: a couple of worms, some tackle and a cup of coffee, too.

Laura Daniels runs the business with her husband, Andy, and she said she’s got plenty of regulars.

“You have everything from people who own these beautiful yachts, but they fish too, and they come in. And then you have the poor guy that really does come down every day picking change out of his pocket to buy bait, to go catch his dinner,” Daniels said.

But it’s a place for folks to just listen, too, to what people are thinking about the economy.

“In this area, it’s a little troublesome,” Daniels said. “Because obviously, we’re an industrial town that is on its last leg of the great days of industry.”

GE Transportation used to be the biggest employer around town, but the company cut a third of its remaining workforce in the past couple years, a workforce already down from its peak. And manufacturing hasn’t just been from GE either: Hammermill Paper, American Meter and Steris have also up and gone.

The flight of industry has changed Erie from the kind of place Patrick Fioravante knew. He worked at GE for 42 years before retiring. Now he feels like the government doesn’t care about him anymore.

“They say they do, but it’s every man for himself,” Fioravante said.

That’s the same thing Marketplace found in its last round of polling in partnership with Edison Research. Nearly three-quarters of the people in this country feel Washington has just forgotten about them.

And here’s a reminder of what that can feel like from a man named Mike Torak, who says providing for his children is the most important thing for him:

“I hate politics,” Torak said. “I don’t listen to it, I don’t watch it. I don’t like those headaches.”

More stories from Erie, Pennsylvania, as our series “The Big Promise” continues next week.