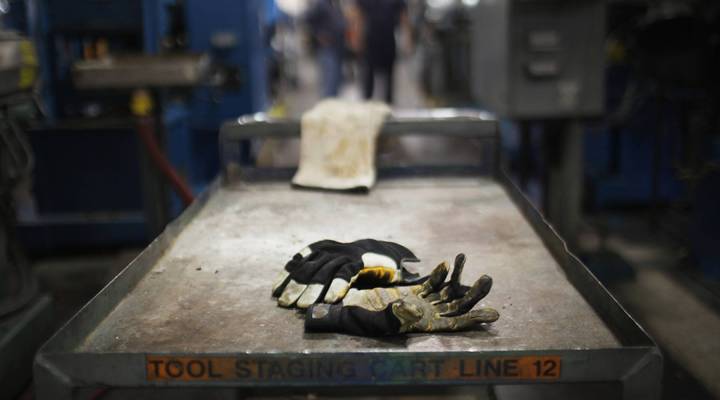 COPY
Work gloves are viewed on the factory floor of a high end plastic processor on October 2011 in Reading, Pennsylvania.  Spencer Platt/Getty Images
The Big Promise

One of President Donald Trump’s big promises while he was campaigning was that he was going to bring manufacturing jobs back to this economy. More recently, he said the Republican tax overhaul plan will “lead to the rebirth of American industry.”

Marketplace host Kai Ryssdal spoke to Scott Slawson, the president of Local 506 of the United Electrical, Radio and Machine Workers of America about how he sees the manufacturing industry and how it is doing in Erie, Pennsylvania. The following is an edited transcript of their conversation.

Kai Ryssdal: Give me a sense of the economic mood in Erie, Pennsylvania.

Scott Slawson: Well, I mean there’s some optimism. We’ve got some new programs starting up here called Up For The Jobs and we’re hoping to attract some manufacturing. From the standpoint of dealing with General Electric?  Not so good. We’re transferring a lot more work out of our facility up here down to the Fort Worth facility, so that’s not good.

Slawson: Not really. When you think about it, I mean, the president came here made some specific promises to this area and, you know, one of them revolved around locomotive manufacturing and what we see here is more of our work being transferred out of here. So “end of an era” is what they’re calling it.

Ryssdal: So, I’ll tell you what, when we were in Erie in January and we had you on the live show and then we talked to you again in February, you basically said you weren’t expecting anything out of this president and it sounds like your expectations are being met.

Slawson: Yeah, I think that we’ve been on the track that we’re on from an economic standpoint since the early-mid 70s. And I think that there’s not going to be any one person that turns this thing around. But on the on the flip side too, you have to, from a community standpoint, you have to fight for your own – as a state, as a community. I think that our leaders here they need to work harder towards accomplishing some of the goals that we set forth for them. So, I don’t expect a whole lot out of Washington, and so far, that’s what we’ve seen.

Ryssdal: Let’s look ahead then. I take your point about, you know, decades of economic decline not being turned around in the nine months that Donald Trump has been president. But let’s look ahead to the end of a first trump term, or the end of a second Trump term in 2024. What do you think things might look like?

Slawson: I’ll tell you, it’s tough to look. I mean, I got to be honest, to some of the things that I see are encouraging, like renegotiating NAFTA. The problem is how does it become renegotiated? We have a lot of problems internally in the United States with corporations picking up and leaving communities in their wake and moving to other states at taxpayer’s expenses. But at the same time, when you talk about renegotiating NAFTA, if you can strike a deal that’s actually beneficial to working class people, rather than the current NAFTA agreement we have that only benefits the wealthy and the corporations. I think that’s a good thing.

Ryssdal: I don’t know if you’ve been following the news on the NAFTA renegotiations, but they’re going rough and bumpy might be a decent way to describe it. Do you think we ought to just pull out of NAFTA? Do you think the president ought to just cancel it and we’ll go our own ways?