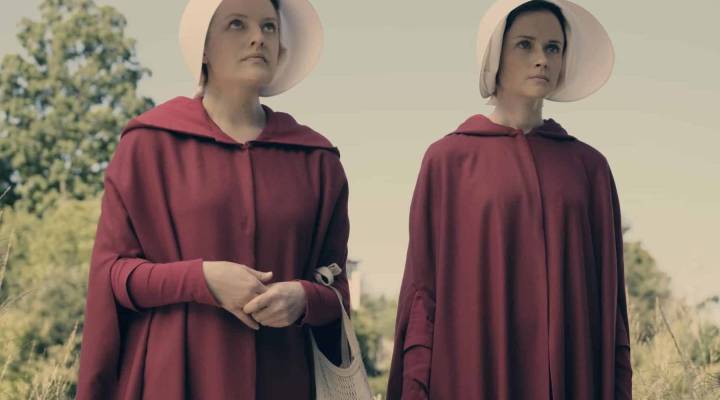 This week, Hulu premiered the first three episodes of “The Handmaid’s Tale.” The TV show is based on the book by Margaret Atwood and set in a dystopian America with a totalitarian government in charge. It’s a world where women have been stripped of their right to control their bodies, to work and to control money. Bruce Miller is the showrunner and creator of “The Handmaid’s Tale.” He talked with Marketplace host Adriene Hill about developing this show. The following is an edited transcript of their conversation.

Adriene Hill: So, what drew you to this story in the first place?

Bruce Miller: I read this book when I was in college, in a new fiction class, which tells you how long ago I was in college. And it was really one of the first books I read that made me feel like I was starting to understand how to be a writer — that “Oh, this is how you put words together into a story.” It was one of those books that no matter when you read it, it always seemed to be relevant. It was perennially relevant. And then I heard tell that there was a TV series coming along, and I was all excited just as a fan of the book. I was excited to see the TV series, and it kinda never really happened. So as I got more into writing television, I had my agent keep checking to see if the rights were available, which they never were. But after eight or nine years of those phone calls, eventually they said they’re looking for someone to come in and write a new pilot and run the show, and I guess pure enthusiasm and 30 years of thinking about it paid off.

Hill: How did it wind up on Hulu?

Miller: Well, most of that took place before I came onto the project. It was a Showtime project originally with MGM. And then Showtime decided not to do it. And I guess there was some sort of competition or bidding war for the project and Hulu won. I think Hulu was looking for a project that they could sink their teeth into, and so that happens above and beyond my pay grade, thank god, because those decisions are seemingly quite complicated, and I never know how they wind up making money off TV streaming. It all just seems so complicated. Luckily, I don’t have to think too much about that.

Hill: What do you make of the political reaction to this show? I saw that the Hollywood Reporter called it the most unintentionally relevant show ever.

Miller: Not completely unintentional. I hope we tried to make it relevant. In terms of its political — everyone sees it in a different way. For me, I just see it as that feeling powerlessness against the changes in government, and I think this is just a very extreme version of that.

Hill:  When did you guys finish the show?

Miller: We finished the show in February. All the scripts were written and most of our filming was done well before the inauguration, and I do think that even after Trump was elected president that there was a question of what that was going to mean, and I think during the time between the election and the inauguration I think it was more up in the air. I think that since the inauguration things have come more into concrete focus. And so there have been more parallels between what we did and what’s going on in the real world since then, but I certainly didn’t know that was coming. We followed the story that we had and certainly Margaret Atwood’s prescience more than trying to look and say, you know, “This is what’s happing in America.”

Hill: Do you think that the fact that the show has become so politicized works in the show’s favor, or do you worry it could turn off part of the potential audience?

Miller: I certainly think it could potentially turn off people from watching it, because it’s not, you know, a show that’s based on the political times now, it’s a show that was based on, Margaret Atwood would say, some of the struggles with the rise of evangelical politics in the 80s. So I certainly wouldn’t want people not to watch because they think it’s just a metaphor digging at their decision or their candidate or their point of view, because that certainly wasn’t the intention. I think of it much more as a character piece and a survival story and an incredible woman in this misogynistic anti-woman environment.

Hill: These are anxious times in this country, and we have talked a lot on this show about entertainment as escapism more than anything else these days. And I wonder, for you, is The Handmaid’s Tale” the kind of show that you want to sit down on the couch and watch at the end of the day?

Miller: I don’t look at TV as escapism or entertainment as escapism. I want to feel along with these characters. I would have constructed a very different show if I thought everyone was going to watch all the episodes in one day. Hulu’s model is to drop an episode every week. It was the very first question I had for them was “How is this going to be distributed?” Because it is heavy stuff. The book is heavy stuff. But I worked on “ER” for a while, and one of the things I loved about the show was that once it was done, you needed, like, half a glass of scotch to get to sleep, and to me it was memorable. I certainly am not in the despair business. I actually think it is a very hopeful show and I think though it’s tough to watch sometimes, it’s supposed to be entertaining. Just like the book is entertaining even though it’s got heavy themes and horrible things happening, it’s just a deep dive into a world and it’s very interesting and satisfying.

Hill: But maybe that scotch can help afterwards before bed.

Miller: Oh, yeah definitely, I would recommend that.