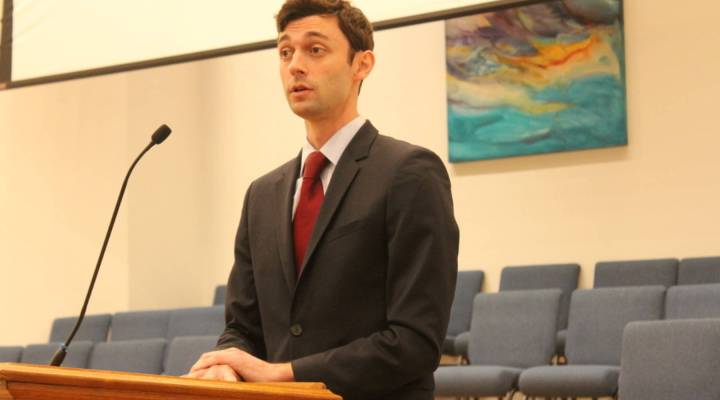 The November election was only five months ago, but already Republicans and Democrats are raising and spending big bucks in special congressional elections, like those in Kansas and Georgia this month.

The outside money is really pouring into Georgia, where a special election is set for Tuesday in the Atlanta suburbs.

Both Republicans and Democrats are testing the limits of how far outside money can take them in the race to replace Tom Price, the new secretary of Health and Human Services. Republicans have controlled Georgia’s Sixth District for decades, but Democrats think they can win it.

There are 11 Republican candidates in the race and five Democrats. If one gets more than 50 percent of the vote, they’ll win outright. Otherwise, there will be a runoff in the summer between the top two contenders.

The leading Democrat in the race is Jon Ossoff, a 30-year-old former congressional staffer who’s become a national hero for many opposed to Trump.

Like a lot of Democratic voters, David Levinson had a tough morning after the presidential election.

“I actually cried. I’ve never cried at the loss of an election,” Levinson said.

Levinson lives in Brooklyn, New York, but he read about Ossoff on Facebook. He’s donated about $60 to Ossoff’s campaign so far and plans to keep giving right up to the election.

If Ossoff wins, it will send a message to Republicans and Trump that Democrats are going to fight, Levinson said.

“They need a good trouncing. They need to be put back in their place. The cork needs to go back into the bottle,” he said.

According to the latest federal filings, Ossoff has raised more than $8 million, one of the biggest hauls for any House candidate in U.S. history, according to the Center for Responsive Politics, which tracks political donations.

Much of Ossoff’s funds have come from out-of-state donors like Levinson.

That bothers Republicans in the 6th District like Steve Covert, a retired businessman.

Steve Covert, a longtime Republican, says all the outside money going to Democrat Jon Ossoff’s campaign will inspire his neighbors to vote.

“You know being supported by the money from California and New York and God knows where else. He’s not just a Democratic, I think he’s pretty extremely on the left, and you know, that offends a lot of our sensibilities around here, too,” Covert said.

Republicans have had Georgia’s 6th District seat since the 1980s, but last year Trump barely won it. Democrats see that as an opening. Covert said the outside money coming in is inspiring him and his Republican neighbors.

“We’re motivated. Hopefully we can motivate some that aren’t quite so motivated between now and next Tuesday,” he said.

National GOP groups have sent in at least $4 million of their own to oppose Ossoff.

Ironically, they’re using that outside money to highlight all the out-of-state donors supporting Ossoff’s campaign.

“The truth is Nancy Pelosi’s friends are bankrolling Ossoff’s campaign, because Ossoff will rubber stamp her liberal agenda,” the ad says.

Money isn’t the only thing that’s coming to Ossoff from outside the district. Volunteers like Chris Machonis, a student in Virginia, have traveled to the Atlanta suburbs from around the country. Ossoff’s campaign paid for Machonis’ hotel and bus ride.

“Spent what felt like forever on that bus. Was probably about a 12- or 13-hour ride,” Machonis said, looking tired while taking a break from canvassing for the Ossoff campaign.

The bus arrived at Machonis’ hotel around 4:30 a.m., he said, but it was all worth it. For Machonis, an Ossoff win would be a sign to Republicans in Congress they need to be worried about Democrats stepping up.

“There’s a wave of activism and energy that’s about to hit them in midterms and all the elections to come,” Machonis said.

In the Atlanta suburbs, local volunteers are out knocking on doors for Republicans, too, but area GOP leader Jason Shepherd is worried the party isn’t as energized as Democrats like Machonis. Republicans need to act like they’re the underdogs, even if they’re not, Shepherd said.

“You know, if you run like your 10 points behind, you’re probably going to be 10 points ahead at the end of the day,” Shepherd said.

The money shows both Republicans and Democrats think this race is competitive.