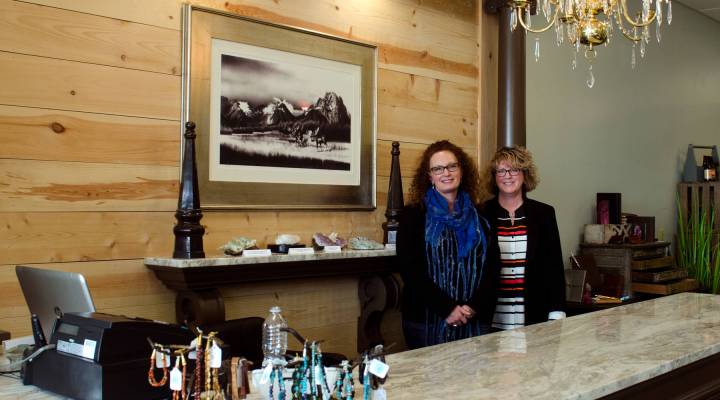 COPY
Sisters Wendy Neckers and Valerie Beckerink grew up near Corry, Pennsylvania and returned as adults. They manage two businesses in the downtown area, which they’re trying to help revitalize. Caitlin Esch/Marketplace
The Big Promise

Sisters Wendy Neckers and Valerie Beckerink grew up near Corry, Pennsylvania and returned as adults. They manage two businesses in the downtown area, which they’re trying to help revitalize. Caitlin Esch/Marketplace
Listen Now

Sisters Wendy Neckers and Valerie Beckerink, both in their 50s, grew up near Corry, Pennsylvania. As children, they remember making the 10-mile pilgrimage to downtown.

“I rode my horse to the Dairy Queen,” Beckerink said. “You don’t live in the country and not have a horse.”

She also remembers her grandmother’s trips.

“She used to buy us parakeets and canaries. She would buy each one of us girls one, and we would love them until they passed away,” she recalled.

To a child, downtown Corry felt big and magical. But, really, it stretches only a few blocks. And like so many main streets in so many small, rural towns, Corry’s downtown has lost a lot of its magic.

The sisters and a few other small business owners have been trying to turn that around.

Along Center Street, there’s a trendy shop for home décor, a children’s clothing boutique and the Painted Finch Gallery. Neckers opened the gallery, which is filled with paintings, photographs, pottery and jewelry, two years ago.

A painter herself, Neckers said she wanted to support local artists and “create a culture here that wasn’t necessarily in existence.”

There should be beautiful places in your own town, Beckerink added.

“Because it does feel like the whole area — I hate to say — their dreams are sucked out. You’re just too busy trying to live,” she said.

The Painted Finch is one of a handful of stores in downtown Corry, including thrift stores, antique shops and gift shops.

Corry, once an oil boomtown, has a population of about 6,500 people. While the town has lost manufacturing jobs over the years, making things is still what Corry does.

Several of Neckers’ customers are from Corry, but she said for business to flourish, the town would need to prosper more. Many people, she explained, can’t afford a $500 painting or a $50 ceramic bowl.

That’s one reason the Painted Finch hasn’t made a profit since it opened. But it’s not reason enough to keep Neckers from expanding. In a move she described as business suicide, she recently opened Epiphany’s Emporium next door to the gallery. The shop sells cowhide rugs, handbags and jewelry. Her sister is the manager.

“As soon as I committed to the landlord about renting this space, I said, ‘This is not a good idea,’” Neckers said.

“But, thank heavens she loves her sister,” Beckerink said.

Neckers also loves her town, which is why she helped start the Downtown Corry Business Association last year.

Made up of a handful of women business owners, the group meets regularly to brainstorm ways to revitalize their downtown.

For example, the group created First Fridays, a monthly event to bring people downtown for food, live music and shopping.

“It was a good experience last year … and we were really flying by the seat of our pants,” said Miki Hammond, owner of Pipit’s, a high-end children’s store. Hammond said customers outside of Corry, like from Erie or Pittsburgh, always tell her she should relocate her business to a bigger city. But Hammond is reluctant.

“I live here,” she said, adding that “the cost of doing business is less down here than it would be in the city proper, and that’s a huge factor when you’re trying to grow a business.”

Hammond and the other women business owners know what they — and Corry — are up against. But they have a strategy. Corry is located off Route 6, along what’s known as the Artisan Trail. It’s a series of small towns with galleries and antique shops that attract tourists vacationing on Lake Erie.

Hammond said, this summer, “I just want to roll out the welcome mat. So, when they come around the corner, they look at my downtown and they think, ‘Ooh, I want to see what’s in every single one of those places!’”

And maybe, she said, they’ll find some magic.