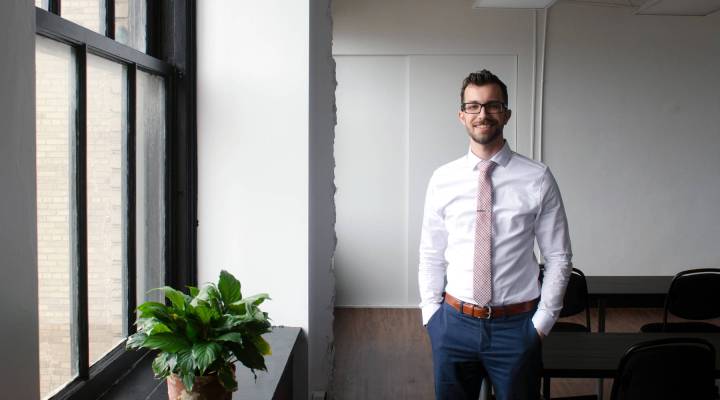 Sean Fedorko stuck around his hometown just long enough to graduate from college. Then he did what a lot of young people from Erie, Pennsylvania, do. He left.

“It was a pretty strong narrative of ‘get out.’ You know, that there wasn’t going to be a lot of growth,” Fedorko said.

Fedorko headed to the University of Indiana to get a master’s degree and eventually wound up in Washington, D.C., working part time in telecommunications policy. About a year in, he was offered a temporary gig back in Erie. He thought it’d be a good opportunity to visit for a few months, see his family and old friends. He also planned to join a co-working space, where he would be around other young workers building startups, designing software and working remotely.

“It seemed obvious, like everywhere would have something that did co-working. Everybody has extra square footage in Erie,” he explained.

But there were no co-working spaces, so Fedorko decided to launch his own. He never did return to Washington.

Today, he’s the owner of Radius CoWork, Erie’s first co-working space. For a couple hundred dollars a month, freelancers and entrepreneurs can get a desk, office equipment and a community.

“So by doing that, they’re able to commit their limited financial resources to marketing, to product development, to longevity,” Fedorko explained.

Radius CoWork, which includes desk space, conference rooms and a kitchen, has become a hub for techies and entrepreneurs who are trying to help revitalize the city.

The same goes for Fedorko, who was paying more rent for his one-bedroom apartment in Washington than he is for this entire co-working space.

Fedorko is part of the burgeoning startup scene in Erie, much of it centered in a 1920s building fittingly named the Renaissance Center.

Nine floors below Radius CoWork, in the basement, Tammy Lyn Fox is busy converting a former restaurant into a culinary incubator.

“So, you can see it has that old steakhouse feel,” Fox said, pointing at the dusty floors and grease residue still on the walls. “There’s some asbestos. But, you know, we’re ready to tackle it all.”

Fox, who has her own catering business, envisions bright tables and cabinets stocked with expensive cookware people can share.

The remodeling continues on the 12th floor of the Renaissance, where 26-year-old Jessica Yochim is putting in a new studio for her video production company, MenajErie.

Yochim, an Erie native, did video work in Los Angeles after college. But there was lots of competition, and she realized her skills could be put to better use in her hometown.

That’s when she combined forces with her high school sweetheart (now her husband), Nick Taylor. The pair have come a long way since 9th grade, when they were making class videos about Shakespeare plays.

“There were some elements in there that carried over through the years,” Taylor said, as Yochim chimed in: “I’d like to think we grew a little bit since then.”

They’ve grown a lot. Since MenajErie opened in 2013, the couple has hired a third person, launched an internship program and built a creator studio people can rent.

“It’s just kind of crazy. I don’t think we would’ve had this level of growth in a short amount of time if we were located somewhere else,” Taylor said.

The same year they started their business, the two also got a bittersweet bargain. They bought a foreclosed house: two bedrooms, one bath and a yard for less than $40,000.

Young entrepreneurs like these two said they desperately want to see their hometown rebound.

Beth Zimmer, managing director of the Innovation Collaborative in Erie, said things could be headed in that direction.

The real challenge, she said, is creating economic sustainability.

Fedorko has some thoughts on that, which have more to do with lifestyle than business strategy.

“If there was no Thai food in the city, no brewery and nowhere to take my boat, why would I want to live here?” he said.

He said tax credits and hiring incentives are important, “But what’s even more crucial is making the place you want innovation to occur attractive for people to be.”

Because trendy restaurants, fun bars, parks, bike trails and other places to escape are what you need after a long day of building the new Erie.